Health Benefits of Coffee vs Tea: Which is Better? 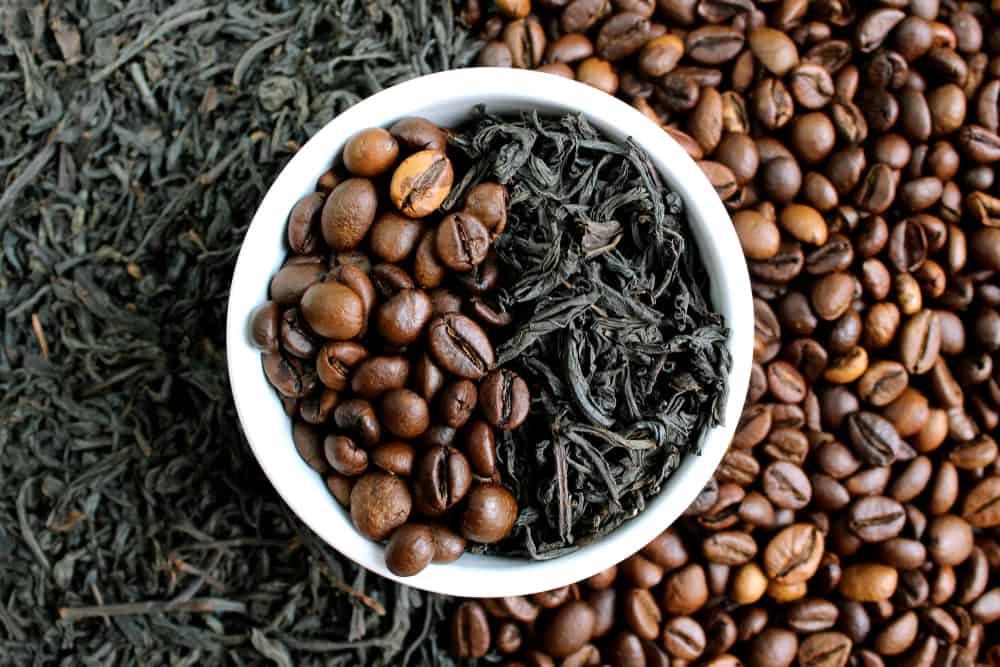 In today’s busy world, many people rely on caffeine to keep themselves productive throughout the day. Coffee and tea are the two most popular ways to get a caffeine fix. While too much caffeine can be bad, both coffee and tea have several health benefits. But which of these two packs the most punch? Here, we will discuss the health benefits of coffee vs tea.

Note: In this article, “tea” will refer to drinks made from true tea leaves (Camellia sinensis) and not herbal infusions like chamomile, banaba, or ginger tea.

Health Benefits of Coffee vs Tea

Firstly, because many people drink coffee and tea for its caffeine content, it’s important to know which contains more. On average, a cup of freshly brewed coffee contains almost 100 mg of caffeine. The same sized cup of steeped black tea may contain up to 50 mg of caffeine. Green tea contains even less per cup, amounting to less than 30 mg.

However, it is important to note that different varieties, quality, and preparation methods can yield varying amounts of caffeine. Generally, instant mixes do not contain as much caffeine as freshly ground and brewed coffee beans or steeped tea leaves. A cup of instant coffee may contain approximately 60 mg of caffeine, while brewed coffee has >90 mg per cup.

As an additional warning, only drink caffeine in moderation. Too much caffeine can cause adverse health conditions such as palpitations, sweating, and nausea. Remember to get enough sleep at night instead of solely relying on caffeine to stay awake.

Verdict: if a caffeine kick is what you are after, coffee wins over all varieties of tea.

In one cup of green tea, there are about 112 mg of EGCG, 51 mg of EGC and 15 mg of EC. EGCG (epigallocatechin gallate) is considered to have the most antioxidant activity. Because true teas are made from the same leaves, they all contain catechins. However, the preparation methods of green tea, white tea, and black tea are different and can alter the amount of each catechin. White tea has the most antioxidants, while black tea has the least.

On the other hand, coffee has compounds known as chlorogenic acids (CGA). Green coffee beans are unroasted or raw coffee beans and contain the most CGAs. Green coffee is gaining popularity both as a supplement and as a beverage. While it contains less CGAs, brewed black coffee still has similar health benefits. Instant black coffee contains about 36 mg of CGA while brewed coffee may contain more than 130 mg of CGA. In addition, black tea also contains some CGAs.

Verdict: while there are no studies that state whether catechins or CGA are superior as an antioxidant, tea is the winner because it contains both catechins and CGAs.

Last but not least on this list of health benefits of coffee vs tea is disease prevention. As previously mentioned, both coffee and tea contain caffeine and antioxidants. Because of their antioxidant properties and other compounds, tea and coffee may prevent certain cancers, diabetes, and cardiovascular diseases.

In studies, catechins and CGAs displayed benefits for weight loss, insulin sensitization, and improving lipid profiles. In a study, CGAs increased homocysteine levels in the blood which may be an indicator for cardiovascular disease. Generally, the drinks with the lowest caffeine-to-antioxidant ratio are the most beneficial.

Verdict: tea is the winner because it is generally lower in caffeine, has more antioxidants, and has fewer negative health effects than coffee.

In conclusion, tea should be your drink of choice because it shares many health benefits with coffee—and has extra ones that coffee does not. As a reminder, while tea and coffee can be healthy drinks, they cannot replace your normal medications or a healthy diet. Talk to your doctor to see if you have any conditions that coffee or tea consumption can affect (e.g. hypertension, diabetes).

What is it about coffee?, https://www.health.harvard.edu/staying-healthy/what-is-it-about-coffee, Accessed January 1, 2021.

The Health Benefits and Risks of Coffee

Benefits of Drinking Coffee After Breakfast

The Health Benefits of Herbal Tea