Super Soup: How a Bone Broth Cleanse Benefits the Body 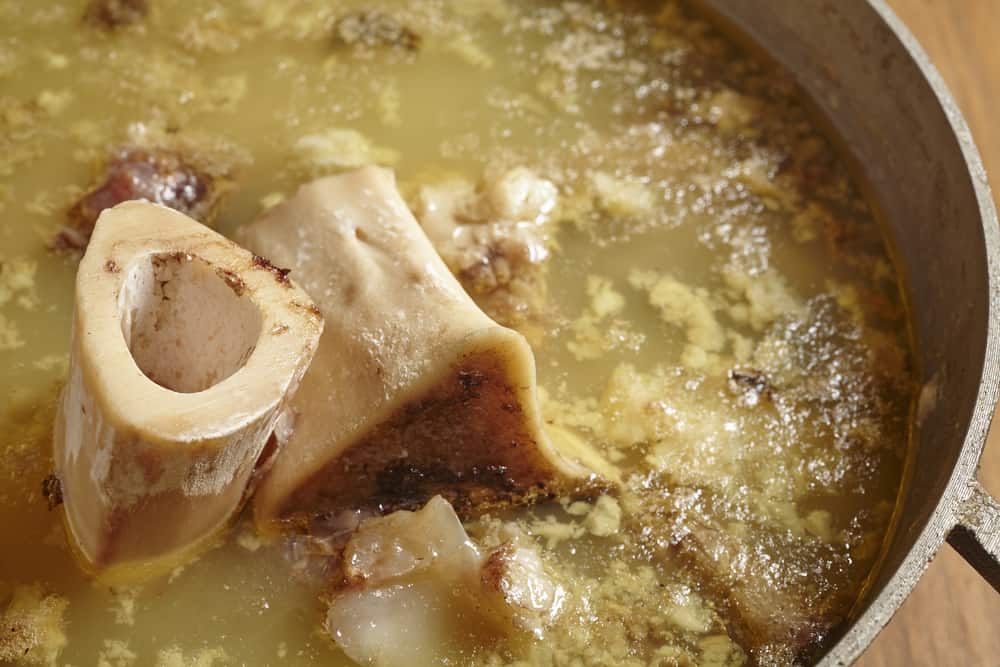 Also known as stock, bone broth is liquid made from boiling animal bones and connective tissue. Chefs use stock as a base for soups, sauces, and even gravy while others drink it as a bone broth cleanse. But people have been making bone broth since the early days of the species. Anthropologists estimate that people have been drinking liquid infused with bones and other animal parts since prehistoric times.

With its wide variety of nutrients, people all over the world have been making bone broth, and in recent years, enjoying a bone broth cleanse.

Scientists believe that since humans have hunted hunting animals for their meat, we have been boiling their bones too.

Physicians as far back as Hippocrates have espoused the benefits of bone broth. Nearly every civilization has had their version. One example is the popular Japanese ramen dish Tonkatsu. After all, that translates to “pork bone broth.”

Glycine is often considered “non-essential” because it can be produced by the body. It is the simplest of all amino acids. In terms of detoxification, however, glycine is essential. Because without it, it takes a longer time for the liver to do its job.

As one of several starting compounds of glutathione, glycine’s importance becomes even more highlighted. Glutathione is the body’s most powerful antioxidant and detoxifying agent. It is made up of just three amino acids bonded together – glycine, cysteine, and glutamic acid.

In turn, glutathione recharges the other antioxidants in the body including vitamin C, vitamin E, and lipoic acid. Glutathione helps the body combat free radicals and prevent rapid physical deterioration.

Bone broth, or a bone broth cleanse, is rich in many nutrients, which may provide some impressive health benefits.

Aside from the previously mentioned glycine, these include high amounts of various minerals, the protein collagen, and the joint-improving nutrients glucosamine and chondroitin. Adding a few vegetables to bone broth can significantly enhance its nutritional benefits.

Among those benefits are:

• Weight Management – A bone broth cleanse and broth-based soups can help you feel full despite their low-calorie content, making it an excellent choice for people following a weight loss diet plan.
• Better Hydration – The high water content in bone broth helps you stay hydrated. Water makes up 70 percent of the body and impacts virtually every bodily function.
• Improved Sleep – Bone broth contains small amounts of the amino acid glycine, which may promote relaxation and deeper, more restorative sleep.
• Anti-inflammatory effects. The glycine in bone broth may have some anti-inflammatory and antioxidant effects.
• Joint health. Glucosamine and chondroitin, found in the broth, may help to improve joint health and reduce symptoms of osteoarthritis.
• Bone health. Bone broth contains nutrients that are important for bone health, such as calcium.

Broth may have fallen out of favor in most households today, probably due to the increased pace of life that has reduced home cooking in general. Far from being old-fashioned, broth continues to be a staple in professional and gourmet cuisine, due to its unsurpassed flavor and body.

A bone broth cleanse remains a popular choice when people are considering cleansing their bodies of toxins. Humans are in contact with more toxins today than ever before in history. These include the thousands of chemicals that are now in our food, water, and air, as well as all kinds of radiation that we often do not see.

Even as the body performs internal cleansing daily, each and every time the body cleanses compounds from the blood, depletion of glutathione and other vital nutrients occurs. It is important for the body to detoxify and, perhaps surprisingly, something as ancient as bone broth can assist in that process.

Although there remains no scientific evidence that bone broth can relieve joint pain, make skin firmer, improve digestion, or strengthen bones, it is still highly nutritious. The addition of bone broth to one’s daily diet gives one access to the enumerated health benefits here.

What Is Bone Broth, and What Are the Benefits? https://www.healthline.com/nutrition/bone-broth-101#fa-qs, Accessed December 8, 2021