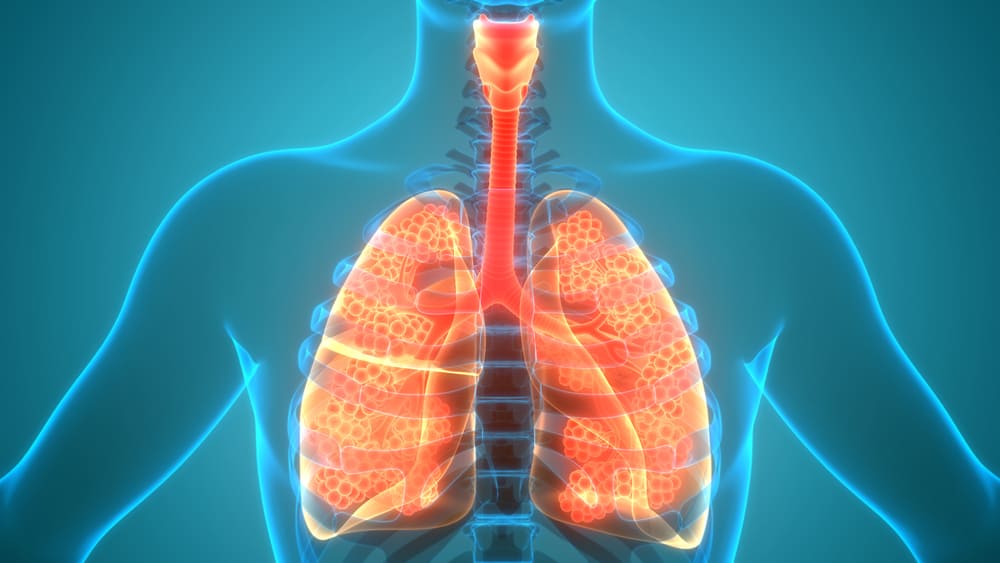 Emphysema is a progressive respiratory condition characterized by chronic cough, sputum production, and shortness of breath. It is also one of the major forms of chronic obstructive diseases (COPD) alongside chronic bronchitis. While tobacco use is the main risk factor, it’s also important to learn about the other causes of emphysema besides smoking.

What You Need to Know About Emphysema

What happens when a person has emphysema?

Before we proceed with the discussion on the risk factors for emphysema, we need to talk about what happens when someone has this condition.

In a healthy person:

After we inhale, air travels to the nasal cavity, pharynx, and trachea. From the trachea, the air proceeds to the left and right primary bronchi.

To reach the elastic, grape-like alveolar sacs in the lungs, air will first pass through the small, tubular bronchioles. Once in the alveolar sacs, the gas exchange happens. This means the alveoli expand to take in oxygen and shrink or constrict to release carbon dioxide.

When someone has emphysema:

Over time, the trapped air causes the alveolar sacs to rupture or lose their shape (elasticity). This eventually leads to symptoms like difficulty of breathing.

How does smoking cause emphysema?

Later on, we’ll talk about the causes of emphysema besides smoking. But for now, let’s explain why smoking is the main cause of pulmonary emphysema.

According to reports, cigarette smoking is responsible for the majority of emphysema cases because it damages the lung tissues. Moreover, cigarettes can irritate the airways and cause inflammation.

This inflammation affects the cilia or the hair-like projections lining the bronchial tubes. Cilia function to “sweep” unwanted debris (such as microbes) from the airways. So when it sustains damage, the body will have a difficult time clearing the airways. As a result, there will be further inflammation and excessive mucus production, both of which lead to difficulty breathing.

What causes emphysema besides smoking?

While smoking is considered the main cause of emphysema, please note that there can also be other risk factors. Generally, anything that damages lung tissues, particularly the alveolar sacs, can trigger the development of emphysema.

Keeping this in mind, what causes emphysema besides smoking?

One of the non-modifiable risk factors for emphysema is a person’s age. According to reports, the symptoms of emphysema often manifest in patients who are 40 years old and above.

Experts emphasize that aging may not a direct cause of emphysema. The more likely reasons that older people develop symptoms are aged lung tissues, which are more susceptible to damage, and longer exposure to lung irritants like chemical inhalants and smoking.

What causes emphysema besides smoking? According to studies, genetic anomalies can increase your risk of developing the condition. For example, a deficiency of the protein alpha-1-antitrypsin can cause lung damage even if a person doesn’t have long-term exposure to lung irritants. This is because alpha-1-antitrypsin protects the elasticity of the lungs.

Moreover, people with an alpha-1 gene anomaly are more likely to develop emphysema at an early age. According to doctors, if emphysema or other COPDs runs in your family, it will be a good idea to consider genetic testing for alpha-1-antitrypsin deficiency. Similarly, a smoker is more likely to suffer from emphysema if they have relatives with COPD.

9 Signs and Symptoms of Emphysema

The causes of emphysema besides smoking include long-term exposure to air pollutants.

Pollutants are lung irritants that we inhale. They can damage lung tissues. Cigarette smoke is one example of an air pollutant, which is why smokers and those who are exposed to second-hand smoke are at risk of developing emphysema. Other examples are:

Being exposed to these air pollutants a few times is probably not going to cause emphysema. However, if you are frequently or regularly exposed to them, the risk significantly increases. If your work involves any of the air pollutants mentioned above, wear protective equipment such as a mask.

Given that the main risk factor for emphysema is cigarette smoking, this COPD is a highly preventable condition. Experts emphasize the need to stop smoking, avoid secondhand smoke, minimize exposure to air pollutants, and improve indoor air quality in your house and workplace.

What Causes COPD Other Than Smoking?
https://www.franciscanhealth.org/news-and-events/news/smoking-isnt-only-cause-copd, Accessed October 14. 2020

How to Cleanse the Lungs: Natural Techniques to Improve Breathing