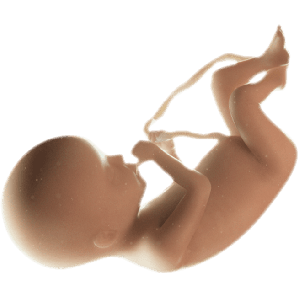 At this point, your womb has grown significantly from its original size.

Week 20 of Pregnancy: All You Need to Know What do you need to know about week 20 of pregnancy?

A normal pregnancy usually lasts for around 40 weeks, so now that you’re 20 weeks pregnant, you’ve officially reached the halfway mark! Just another 20 weeks to go, and you’ll finally be able to hold your baby in your arms. There’s always a cause for celebration during the weeks of your pregnancy, but reaching the halfway mark is still a victorious feat.

At week 20 of pregnancy, your baby will be doing a lot growing. If you didn’t feel pregnant before, then by this time, you’ll start feeling the weight of your baby growing in your uterus. During the 20th week of your pregnancy, which falls under the second trimester, you won’t be feeling as tired or fatigued as you did in the first weeks of your pregnancy.

Once you’re at around 20 weeks, you may feel like you’re more energetic than you were during the first trimester. Aside from this, the morning sickness might not be gone for good but will subside. Other symptoms that will show up during this time won’t feel as bad. Something to look forward to during this week onwards is that your baby bump will start to protrude more.

If you haven’t gone shopping for maternity clothes, then now is the time to get some shopping done because your tummy’s only going to get bigger from now on.

At week 20 of pregnancy, or around five months now, your baby will be as big as a banana. Approximately, he or she will be seven and ¾ inches long and will weigh around nine ounces. If you’d like to imagine how big your baby is at this stage, you’ll probably be able to hold them in the palms of your hands. From here on out, your baby will only gain more and more weight.

Facial features will start to become more prominent during this phase in your baby’s development. If you get an ultrasound, you might be able to see the curve of their noses. Speaking of ultrasounds, you’ll also be able to find out the gender of your baby at this point.

So, if you’d like to know if your little one will be a boy or a girl, it’s best to ask your doctor during one of your visits. Other major developments in your baby that may take place in the 20th week are the following:

At week 20 of pregnancy, you can expect more movement from your baby. Slight flutters or gentle kicks called “quickening” will become more noticeable during this week and onward. Your baby will now be active for an estimated 10-30% of the day and might be moving every minute! You may also start seeing patterns in your baby’s movement because, during this time, they’ll already have an established pattern for waking up and sleeping.

At 20 weeks pregnant, your body will continue to make room for the baby growing inside of you. Your uterus will now be in line with your belly button, and you may start gaining around .23 kg to .45 kg per week.

In line with that weight gain, you’ll start beginning to feel cravings during this time if you haven’t. Pregnancy cravings may have begun during the first trimester but are believed to peak during the second trimester. These cravings are usually harmless and are just caused by the fluctuation of hormones or a way for your body and mind to cope with stress brought about by pregnancy.

In the Philippines, there’s a specific term for pregnancy cravings called “paglihi.” The term “paglihi” can refer to food you’re craving during the course of your pregnancy or even celebrities or public figures you’re particularly fond of during this time. The “paglihi” belief also goes far as saying that whatever cravings you have during this time will determine how your baby will look! There aren’t any studies that prove any correlation between what you eat and how your baby will look like, so feel free to munch on whatever you’re craving.

However, in some cases, pregnant women will develop a craving for inedible objects like soap or dirt. This phenomenon is called ‘pica’ and can be a sign of an underlying health condition like iron deficiency. If you find yourself craving something that’s inedible, contact your health provider.

You may also want to discuss any questions you have about childbirth and the hospital you want to give birth in.

By now, you may worry about getting a bit of movement in your routine. Your worry isn’t misplaced, considering that your body is still slowly adapting to a lot of changes. Exercise should be mainly focused on simple stretches. A good rule of thumb would be to stop any movement that moment it feels painful.

Filipino superstitions may tell you to avoid specific movements to avoid a problematic pregnancy. One superstition goes that stepping over ropes or sewing will guarantee that your labor will be a tough one. There is no factual basis for this whatsoever. If you’d like to learn more about how you can make your baby’s delivery easier, try asking your doctor or try signing up for local childbirth classes in your area. While you’re at it, you may also be interested in signing up for breastfeeding classes to prepare for your baby’s big day.

With just a couple of weeks left until your due date, it’s time to start making preparations for your baby’s arrival. At week 20 of pregnancy, most of the significant developmental changes would have already occurred for your baby. Now, all they have to do is grow big and stronger. For any concerns about your pregnancy or your baby’s health, it’s best to consult with a medical practitioner as soon as possible.

Hello Health Group does not offer any advice, diagnosis, or medical treatment.

Pregnancy Cravings: When They Start and What to Do About Them,  https://flo.health/pregnancy/pregnancy-lifestyle/nutrition-and-weight/pregnancy-cravings, Accessed March 24, 2022