Is Bee Pollen Good for Your Health? What’s the Buzz 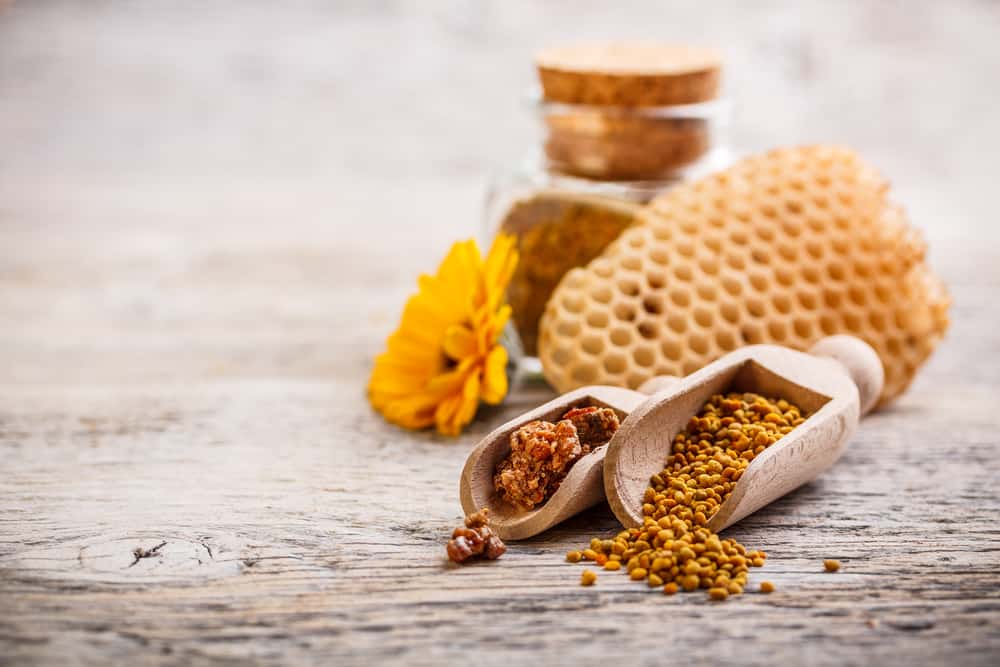 While honey has been hailed as a superfood by many, is bee pollen good for your health? Learn more about bee pollen side effects today.

What is bee pollen?

Pollen is considered the “male” fertilizing agent of plants. This is usually a dusty or powdery yellow substance found on flowering plants. Pollen is also one of the most common triggers for allergy sufferers.

Bees and other animals travel from flower to flower, carrying pollen. The pollen taken from one flower and transferred to another causes fertilization, which allows the flower to bear fruit. Honey bees are an extremely important part of the ecosystem because they are responsible for pollinating one-third of the world’s food crops.

After bees collect nectar and pollen from flowers, they return to their hive. While the sweet nectar is used to make honey, some of the pollen gets mixed in. Bee pollen is pollen from flowers that are mixed with bee saliva. It is a mixture of enzymes, vitamins, minerals, proteins, and antioxidants.

Why bee pollen is good for your health

It can lower cholesterol and fat

Clinical studies have shown that bee pollen has hypolipidemic or fat-lowering properties. The study tested bee pollen on blood samples. After administration of the pollen, there was a noticeable decrease in the blood lipid concentration and cholesterol.

Low-density lipoproteins (LDL) is also known as “bad” cholesterol and is often associated with hypertension and atherosclerosis. Both these conditions contribute to more advanced cardiovascular diseases such as heart attack and stroke.

As a complement to a healthy, low-fat diet with moderate exercise, bee pollen may be helpful as a preventative measure against dyslipidemia and heart disease.

In the same line as the previous benefit, bee pollen was shown to improve hormone levels and response. The lowering of blood lipid concentration was related to changes in insulin, testosterone, and thyroxine. These hormones are responsible for lipid breakdown and uptake by cells.

Bee pollen can also lower blood sugar or hypoglycemic effects. The unsaturated fatty acids, phospholipids, and phytosterols are said to be responsible for this. In addition, more insulin also helps to lower blood glucose levels.

It has detoxifying properties

In one study, rats were given several toxins and drugs that are known to cause liver damage. These toxins include paracetamol and alcohol. In response, liver enzymes increase in the blood. After ingesting bee pollen, these liver enzymes decreased significantly (to safe levels). The bee pollen, administered together with the toxins, protected the liver cells from damage in the first place.

The secret to staying young?

Who wouldn’t want to turn back the hands of time, even just a little bit? Well, bee pollen seems to also have potent antioxidant properties. The pollen contains vitamin C and anti-inflammatory nutrients. Antioxidants fight off free radicals that damage cells and cause aging.

Vitamin C is an essential nutrient for synthesizing collagen. Collagen maintains joint health and improves skin elasticity, which reduces the signs of aging.

In addition, one study used bee pollen as a dietary supplement for test animals. Because of its nutrient and antioxidant content, all of the test subjects lived longer than the expected life span. Improved lifespan is harder to measure in humans, but the benefits are likely similar.

Raw honey is well-known for its antibacterial and antifungal properties. Fortunately, bee pollen also has these benefits. Extracts of bee pollen have strong effects against several types of common bacteria and fungi. It has broad-spectrum coverage, fighting both Gram positive and negative bacteria.

While plant pollen is an allergen, bee pollen can actually fight allergies. It does this by protecting mast cells that are responsible for releasing histamine. Histamine is the substance that causes allergy symptoms such as redness, watery eyes, and runny nose.

Despite being natural and having several benefits, bee pollen can still have side effects. If you know that you have a bee allergy, do not use bee pollen. Allergic reactions to bee stings can cause anaphylactic reactions. Anaphylaxis is potentially life-threatening and is a medical emergency.

Signs and symptoms of an allergic reaction to bee pollen include:

Bee pollen is available as a food supplement and promises a lot of health benefits. While studies have backed up many of these claims, bee pollen is not a cure for any disease or condition. Bee pollen is generally good for your health. However, bee pollen has side effects if you are allergic to bees. For your safety, talk to your doctor before you decide to add bee pollen to your diet.

Most Common Food Allergies in the Philippines