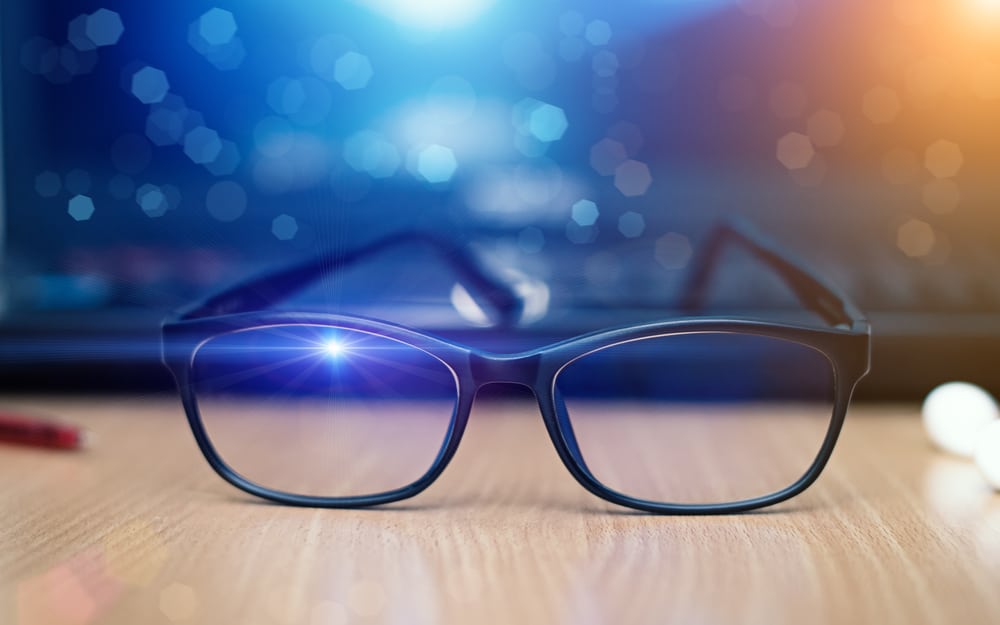 If you’re planning on getting a pair of glasses to protect your eyes from radiation from the notorious blue light, read on. In this article, we’ll answer this question: Is using anti-radiation glasses effective?

Overall Eye Health: All You Need to Know

Radiation is a form of energy coming from both visible and invisible light. Visible lights are those with colors red, orange, yellow, green, and blue. Note that warmer colors, like red light, have lower energy, while cooler colors, such as blue light, have more radiation.

And then, of course, there’s the invisible light, which is composed of ultraviolet rays. UV lights have the highest energy or radiation and can lead to health risks such as sunburn, skin cancer, and eye diseases (depending on exposure).

Here’s the thing: the blue light emitted by our digital screens is the closest to the UV rays. This means that next to UV rays, blue light produces the highest radiation. Due to this, many people believe that using anti-radiation glasses is an effective way to protect the eyes while using gadgets.

Should you worry about computer radiation and blue light?

Devices do emit radiation, but it doesn’t carry enough energy to pose health risks. Moreover, at least one study found out that electronic gadgets do not emit the dangerous ultraviolet rays.

But, what about the blue light?

The American Academy of Ophthalmology points out that there’s no evidence that blue light from digital screens causes eye damage. If you’re feeling some eye discomforts, like blurry vision and tired, achy eyes, it’s probably because of prolonged gadget use. Experts say that when we use our screens, we blink less often. This may lead to eye strain and dry eyes.

Here’s a gentle reminder: although there’s no scientific evidence that blue light damages the eyes, studies have shown that it can affect our sleep-wake cycle. Suffice to say, if we use gadgets close to our bedtime, the blue light may keep us from falling asleep.

Are blue light glasses worth it?

Blue light glasses supposedly work by blocking the blue light emitted by our devices. However, since there’s no scientific data that blue light damages the eyes, The American Academy of Ophthalmology says that we don’t need them. In fact, they do not recommend any special glasses for computer users.

Furthermore, because blue light blocking glasses is a new trend, there is no scientific data about them yet. The lack of study is one reason why many experts are against the use of anti-blue light glasses. According to them, we don’t know about the potential benefits and harms these special glasses may bring to the wearer.

What can we do to protect our eyes?

Since we still do not know if using anti-radiation glasses is an effective way to protect the eyes, experts suggest we stick to the natural ways to reduce eyestrain. You can:

Sit properly. Make sure that your computer is at arm’s length (25 inches) from you. Position the screen in such a way that you are looking slightly downwards.

Practice the 20-20-20 rule. Every 20 minutes, turn your gaze somewhere 20 feet away for 20 seconds. This is an excellent practice to relax the eyes.

Use eye drops. If you experience dry eyes, talk to your doctor about good eye drops containing artificial tears.

Adjust lighting. While using electronic devices, you can reduce eye strain by adjusting the lighting in your room so that the screen doesn’t create a glare. Likewise, you can change the contrast in your devices.

We still don’t have scientific evidence to prove that using anti-radiation glasses is an effective way to protect our eyes. Experts recommend that we stick to natural practices that reduce eyestrain.

Ultraviolet radiation emitted by lamps, TVs, tablets and computers: are there risks for the population? https://www.ncbi.nlm.nih.gov/pmc/articles/PMC4560556/ Accessed December 1, 2020

Should You Be Worried About Blue Light? https://www.aao.org/eye-health/tips-prevention/should-you-be-worried-about-blue-light Accessed December 1, 2020

Are Computer Glasses Worth It? https://www.aao.org/eye-health/tips-prevention/are-computer-glasses-worth-it Accessed December 1, 2020