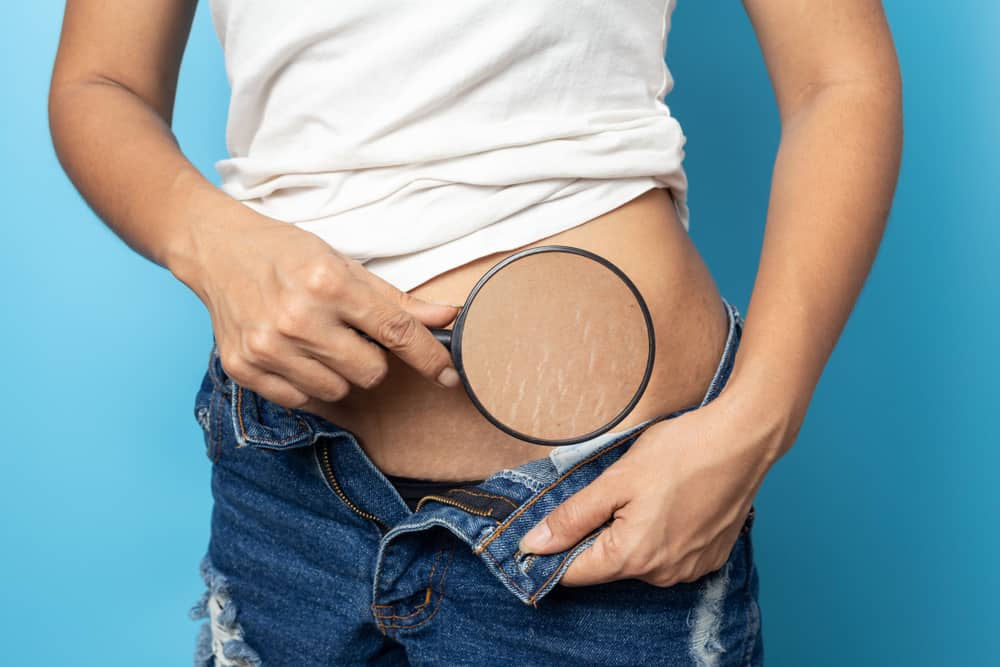 After giving birth to your little one, prepare for larger shoes. According to studies, 60 to 70 % of women develop longer feet and shorter arches. Researchers explain that it’s because of the weight gained during pregnancy and hormones.

The added weight flattens the arches, thus increasing the length of the feet. Additionally, the hormone relaxin causes the ligaments of the body to relax.

Originally, this is meant to make the body more elastic to prepare for childbirth. However, since relaxin can affect the other parts, it also can also make feet expand.

An increase in breast size after childbirth is not unheard of. That’s because the size of the breast really changes after giving birth. This happens particularly to prepare for breastfeeding.

According to experts, the fat tissues in the mother’s breast are replaced by functional tissues that help in breastfeeding. This leads to breast enlargement, at least initially. However, the added size and weight stretches the ligaments of the breast.

This sagging is typically permanent. Doctors say that once the breasts droop, they won’t perk up again.

Talking about how a woman’s body changes after pregnancy will lead us to tackle stretch marks.

Many women who are affected by stretch marks hope that they will go away someday. But experts say that these pinkish or reddish marks will probably stick around for good.

The silver lining is that they will fade in time, typically in a year or two. Once the woman becomes pregnant again, the marks will become more pronounced like before.

Did someone tell you that you’re going to lose a tooth for every child that you give birth to? People say it’s an old wives’ tale, but recent studies show that the tale may have some truth to it.

In one particular study involving more than 2,000 women who reported at least one pregnancy, researchers discovered that there could be a connection between pregnancy and tooth loss.

Dr. Russel said that the connection between tooth loss and pregnancy could be due to:

However, more studies to confirm the link between tooth loss and giving birth.

Melasma – The Mask of Pregnancy

In discussing how a woman’s body changes after pregnancy, we must also talk about melasma.

Pregnant women often develop irregular, blotchy hyperpigmentation on their faces. This melasma or “mask of pregnancy” happens due to hormonal changes and gets worse with sun exposure.

The mask of pregnancy does not pose any health risks and is not painful, however, it can cause some emotional distress due to the perceived negative body image. Doctors say that melasma is permanent unless you get treatment for it.

A little word of caution: there are many available topical treatments online claiming that they can get rid of melasma. Don’t be too hasty in buying them.

The best way to get rid of the mask of pregnancy is to talk to a doctor. They will advise you on the safe and effective treatment approach that is right for you.

In the meantime, avoid unhealthy sun exposure, don’t forget to moisturize, and develop a good cleansing regimen to take care of your skin.

Sure, a mother’s way of thinking changes forever after giving birth to her baby, but that’s not just it. Let’s discuss how pregnancy changes the brain in a physiological sense.

In one study, the researchers analyzed the MRI brain scans of first-time mothers. They took the scans before the women got pregnant and after they gave birth. Results show that after pregnancy, the grey matter decreased in size.

While you may think that this is bad, as shrinking often denotes reduced capacity, the authors of the study said that the effects of grey matter shrinking could be good.

They mentioned that shrinking also happens in teenage brains when a flood of hormones “prune” the synapses – the connection between brain cells. This pruning leads to better brain connectivity.

However, the researchers emphasized that they are still not sure if the grey matter shrinkage resulted from the same pruning that happens with teenagers.

One thing that they determined is that the part that shrunk the most is responsible for social cognition, an area that lets us predict what someone else is thinking or feeling.

Interestingly, when the mothers are shown the photos of their infants, the same area lit up, meaning, it was activated.

According to the researchers, improved social cognition may help the mother take care of her newborn. This is because she will be better at figuring out the meaning behind her baby’s cries and coos.

Right now, the authors of the study cannot say whether the brain changes are permanent or not, but results showed they lasted for 2 years after giving birth.

Mothers understand that getting pregnant and giving birth will lead to many changes – both physically and mentally. How a woman’s body changes after pregnancy depend on many things, like for instance, how much weight they gained while carrying their little one.

Throughout these changes, what matters is continuously taking steps towards achieving and maintaining overall health.

What can I do about stretch marks?
https://www.tommys.org/pregnancy-information/im-pregnant/midwives-answer/what-can-i-do-about-stretch-marks#:~:text=Your%20stretch%20marks%20probably%20won,and%20become%20much%20less%20noticeable.
Accessed August 14, 2020

Unmasking the causes and treatments of melasma
https://www.health.harvard.edu/womens-health/unmasking-the-causes-and-treatments-of-melasma
Accessed August 14, 2020

Can a Positive Pregnancy Test Be Wrong?

What You Need to Know About Ectopic Pregnancy