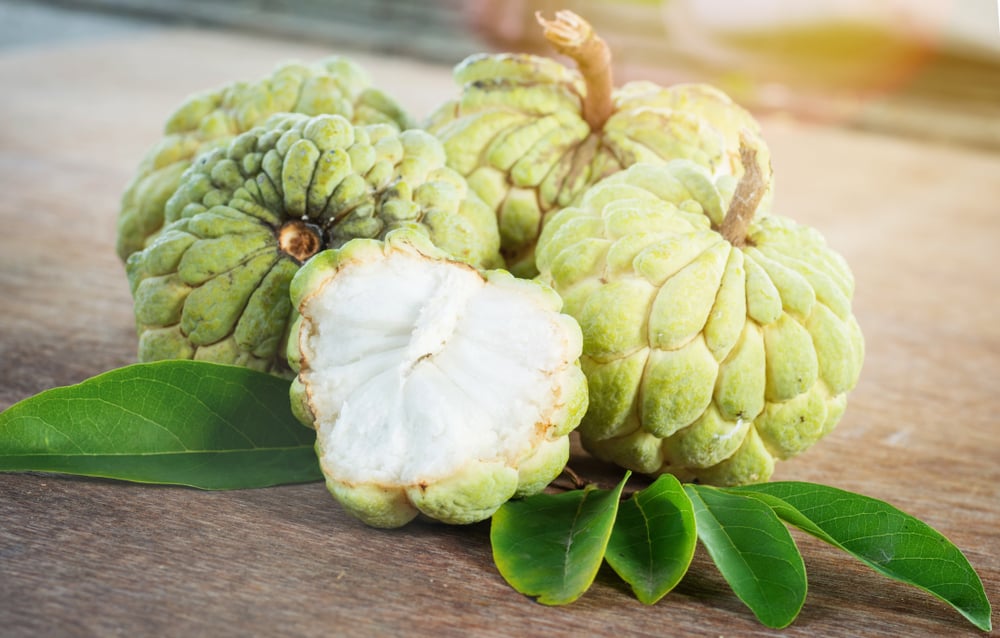 In the Philippines, the atis fruit is mostly consumed fresh as a form of dessert, but it is also used as herbal medicine. It is said that atis leaves most especially possess a lot of healing properties. Learn more about the atis fruit and what herbal benefits it has to help improve health.

What is Atis Fruit?

Atis, also known as sweetsop or sugar-apple, is part of the Annonaceae family and is scientifically known as Annona squamosa. It is a seasonal fruit that is sweet, delicious and nutritious. It also contains:

The atis fruit is related to the custard apple. It is a small tree that grows to a maximum of 20 feet high when fully matured. The leaves are somewhat hairy when young and are oblong shaped. The fruit looks heart-shaped with polygonal tubercles.

he skin of the fruit is scaly or lumpy but the inside of the fruit is edible. It is white to light yellow and fleshy. Atis tastes like custard and the seeds are scattered through the fruit flesh. The seeds of the atis fruit are blackish-brown, hard, shiny, and about 12-18mm long.

Atis is said to have originated from Central America before it was distributed to Mexico and throughout tropical American regions. It eventually made its way to the Philippines during the Spanish era where it was planted and eventually, widely cultivated. It can now be found almost everywhere in the Philippines.

The atis fruit has a lot of different properties for such a small fruit.

Different studies have also shown that atis has analgesic, anti-inflammatory, antioxidant, anti-microbial, and anti-diabetic, insecticidal, and anti-ulcer properties. It’s one of the healthiest fruits available.

Atis is said to be good as herbal medicine. The leaves, bark, root, and even juice of the atis fruit can be used for different things.

The herbal benefits of atis fruit, leaves, and bark include:

Packed with Vitamins and Minerals

Vitamin C. Atis is a good source of antioxidants such as vitamin C. It helps fight the free radicals in the body because it protects the heart from possible cardiac disease.

Vitamin A. Atis also has vitamin A that helps to keep skin and hair healthy.

Magnesium. The atis fruit also has magnesium which helps equalize the water balance of our body and removes acid from joints. This helps to lessen rheumatism and arthritis symptoms.

Atis is also a good source of

The atis fruit also contains the natural sugar fructose which makes it a great snack or after meal dessert. Unlike candy or sugary sodas, atis is a good source of sugar with a low glycemic index. It is a suitable treat for diabetic patients because it will not cause a big spike in blood sugar levels.

Though atis has a lot of medicinal and herbal benefits, it is important to know that the seeds of the atis are poisonous, including the leaves and the bark.

The oil that is derived from the seed can be used as a pesticide. Powdered seed and dried atis fruit has also been used as fish poison and insecticide in India, so be wary of consuming this.

For pregnant women or those planning to get pregnant, it is important to note that atis is an anti-ovulatory. It helps to avoid pregnancy. Also, it is considered an abortifacient.

As mentioned, the fruit is nutritious and safe to consume. However, the use of its other parts such as the seeds, bark and leaves must be used and prepared safely as these may have adverse affects on one’s health.

Eating the atis fruit as part of the diabetic diet is safe. But as with any major change in diet, it is best to consult your doctor.

You may eat the fruit raw and fresh. Some also enjoy juicing it and freezing the fruit as a dessert.

The atis fruit not only has medicinal benefits, but it is also delicious and tasty. The best part is that it is easy to grow and can be planted almost anywhere in the Philippines.

While eating the fruit is generally safe, consult your doctor about its other uses to ensure your good health and safety.

Ampalaya Leaves as Herbal Medicine: All You Need to Know