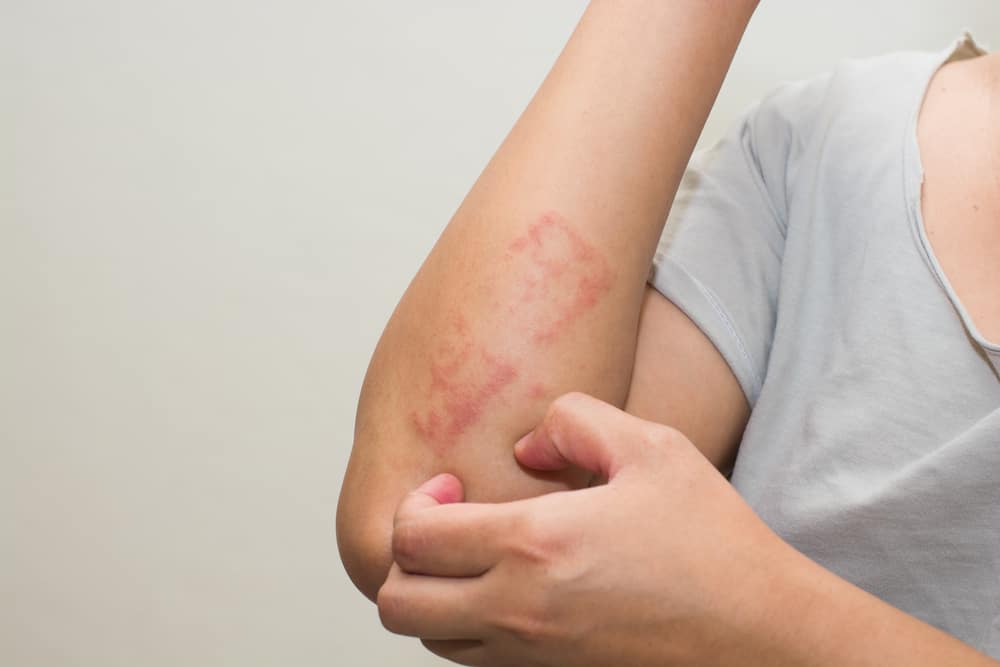 Eczema, also known as atopic dermatitis, is characterized by patchy skin due to inflammation, and redness. This can be itchy and rough and can crack at the surface. In this article, we’ll look into the symptoms, causes, and eczema treatments as well as home remedies.

The Most Common Infectious Diseases Affecting the Skin

Symptoms of this type of dermatitis vary not only where these rashes show up but also on the age of whoever has eczema. In this section, we’ll look into what eczema looks like for babies, children, and adults.

For babies up until two years of age, eczema is likely to show up on the scalp or cheeks. These rashes also have a tendency to bubble up and leak fluid. This itchiness can interfere with sleeping patterns and cause fussiness and rubbing. Make sure that this is avoided as this could lead to skin infections.

For children, from two years old until right before puberty, these rashes are commonly found in the creases of the body. The creases of the elbows or knees or the upper thigh area right under the buttocks are highly susceptible to rubbing against each other. And so, they’re likely to become irritated. Areas like the neck, wrist, and ankle are also susceptible to eczema.

The appearance of the rashes could be bumpy and a shade lighter or darker than the skin tone. They could also thicken or develop into knots that constantly itch through a process called lichenification.

For adults, the rashes could cover much of the body. But similar to kids, they’re more commonly found in the creases of the body. They could also be prominent from the neck up like the neck, face, and the area around the eyes through dry and constantly itchy skin. Compared to children and babies, the rashes could be scalier and lead to even more skin infections due to exposure.

Common causes of eczema are:

Irritants can be found as stripping ingredients in soaps or shampoo and other cleaning products like detergents and disinfectants.

There are also irritants present in food like juices from fruits, juices, meat, and vegetables.

Allergens vary from person-to-person but common ones include dust mites, pets, pollen, mold, and dandruff. Common microbes like staphylococcus aureus, fungi, and viruses could cause itchiness and irritation, and eventually, eczema.

On top of these irritants, stress and hormones can exacerbate symptoms especially for pregnant people and at certain points of menstruation.

Eczema is one of the dermatitis conditions that don’t really have a cure. Oftentimes, eczema resolves itself after some time. There are many treatment plans to curb the symptoms and get rid of the pesky splotches.

Occasionally, areas of skin affected by atopic eczema can become infected. Signs of an infection can include:

For eczema, the following may be prescribed as treatment and/or management:

Since there isn’t something to cure the condition entirely, it’s important to take extra care of your skin even after the treatments have gotten rid of the symptoms.

How to Avoid Triggers

To prevent dermatitis flare-ups, you can try to reduce your exposure to common irritants, which are the following:

To reduce eczema caused by the aforementioned, you may try to:

Allergens such as dust mites burrow in mattresses, pillows, and carpets, and other areas with high humidity. Change your bedsheets often and ensure to have these deep-cleaned regularly.

Certain foods trigger eczema and to determine these, you can work with your allergist/ immunologist. Also, keep track of what you eat to more easily identify food triggers.

Stress, anger, and frustration can cause additional itching and kick-off an itch-scratch cycle that can further aggravate your condition.

On top of the prescribed treatments, there are some home care tips to help care for eczema and your skin in general.

Try taking lukewarm baths with mild soap or gentle cleansers and air drying or patting the skin to dry instead of rubbing it that may cause irritation. Keep your fingernails short to avoid breaking your skin in case you do scratch.

Put lotion or moisturizer right after drying to help your skin retain moisture.

Avoiding rapid temperature or humidity changes also helps with maintaining moisture as well as avoiding situations or events that make you sweat. A way of doing this is making sure you have humidifiers for the dry weather.

Wear softer fabrics like cotton and avoid tight clothing or clothing that could scratch your skin with its rough textures. Learning what your triggers are and making an active effort to avoid them is also crucial to treating eczema.

The Most Common Infectious Diseases Affecting the Skin

7 Common Types of Skin Rashes in the Philippines