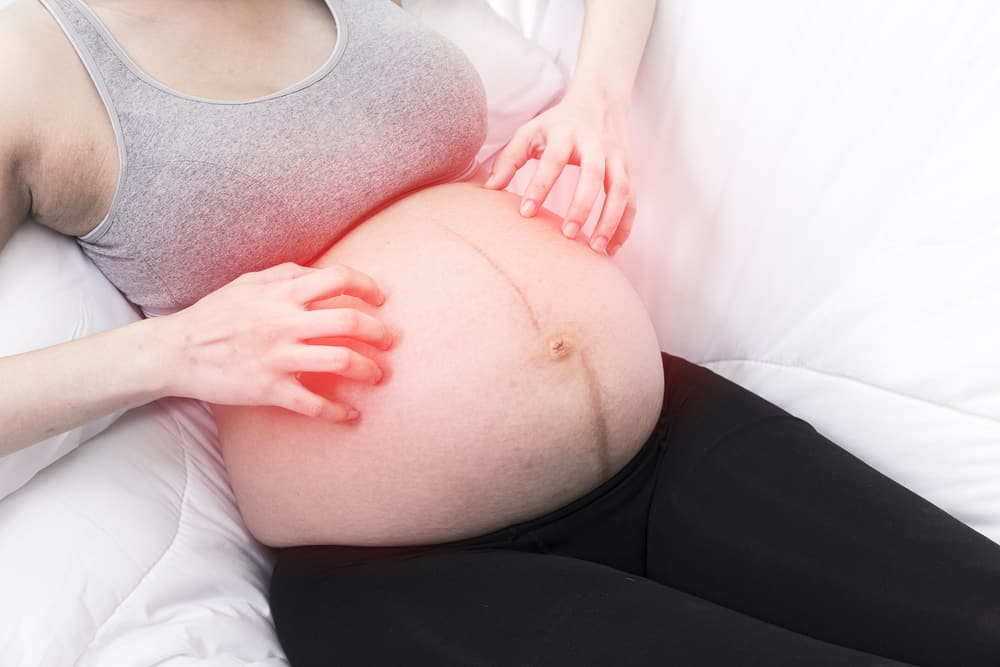 Pregnancy causes complex and significant changes in a woman’s body. But not all women experience the same skin changes during pregnancy.

While many may exude that rosy glow, others may have to deal with something different.

Here are some the most common ones that are to be expected by pregnant women.

What Are The Most Common Skin Changes During Pregnancy?

Stretch marks are one of the most common skin changes a woman may experience during pregnancy.

Almost 90% of pregnant women will experience this. These indented streaks that appear as pink or red gashes on the abdomen, breasts, hips, buttocks, and thigh area are caused by the pulling and stretching of the underlying skin.

Noticeable change in pigmentation generally occurs during pregnancy as well. Increase in hormones causes areas with already dark pigmentation to become even darker. These said areas include freckles, moles, nipples, areolas, and even the labia.

This is also referred to as the “mask of pregnancy.” Melasma occurs when a group of skin cells that produce melanin are activated and constantly stays that way. These cells are called melanocytes, and they cause skin changes during pregnancy by continuously producing more pigment. As this happens, the skin gets darker. Brown or gray-brown patches form usually on the face, particularly on the cheeks, upper lip, forehead, and chin.

Linea Nigra is a dark line that stretches from the navel to the pubic bone. This line on the abdomen may have always been there prior to pregnancy, but only darkens in color when a woman is pregnant due to changes in hormone levels. This change only becomes noticeable around the second trimester of the pregnancy.

Skin changes during pregnancy like the appearance of skin tags is another type that is also caused by hormones. These very small, loose growths of skin usually develop on the neck, chest, back, groin, and even under the breasts. Skin tags increase in number due to the high levels of estrogen.

Every woman will have a different experience with acne during their pregnancy. Some may report that their skin gets better, but most pregnant women suffer from breakouts. Factors that are behind the “radiant pregnancy glow” are the same ones that also cause acne. Oil glands secrete more oil because of the extra hormones produced by the body during pregnancy. Any pre-existing acne problem may be aggravated due to this hormonal change.

Varicose veins are enlarged bluish veins that appear more commonly on the legs. This occurs when the weight and pressure of the uterus compresses and constricts the veins, decreasing the blood flow to the lower body. Skin changes during pregnancy that are like this can also occur on the vulva, vagina, and rectum.

Expectant mothers may also get tiny red veins that appear to branch outward on their face, neck, upper chest, and arms; these are called spider veins. Hormonal changes and increased blood circulation lead to this. Furthermore, this type of skin changes during pregnancy may also be hereditary for some.

How to manage skin changes during pregnancy

Skin changes during pregnancy may be common but there are still ways of addressing some of these conditions. One of which is to make sure that the appropriate diet is followed during pregnancy.

At the same time, when dealing with acne, thorough cleansing is highly encouraged. Pregnant women can wash their face up to two times a day with a mild soap. This will help keep the skin clear of any excess oil that can cause pimples. Also, it is best to avoid touching or picking the pimple to lessen the acne flare.

Another tip is to look for terms like “noncomedogenic” and “unscented” when searching for makeup and skincare products. These kinds of products will less likely clog up the pores, which will help keep the skin clear.

Do not use any topical treatment or take any medication for acne unless cleared by your obstetrician. Some products which work well for acne, like those that contain retinol, are not advisable for pregnant women.

Most types of skin changes during pregnancy are inevitable. Pregnant women will be happy to know that some of this only happens during the pregnancy period. Varicose and spider veins, hyperpigmentation, and linea nigra usually go away after pregnancy.

But some skin changes during pregnancy are more stubborn. Stretch marks, skin tags, and melasma do not always go away immediately after giving birth. Make sure to seek professional help from a dermatologist to address this. If any procedure will be done, it is best to do it after giving birth.

It is easy to get overwhelmed with the many changes that the body goes through during pregnancy. Some of these sudden skin changes may be alarming at first, especially for first-time expectant mothers. So it is best to be aware of the different changes your body will undergo during this time.

Many of these skin changes will be experienced all throughout the pregnancy. Some women may experience more, if not all, of these conditions while others will experience less and maintain that “pregnancy glow.” Due to the varying level of hormones in women, every person who goes through pregnancy will experience these changes differently.

Acne in pregnancy, https://dermnetnz.org/topics/acne-in-pregnancy/, Accessed May 26, 2020

Filipino Food for Pregnancy: 3 Healthy Recipes for Mommy and Baby