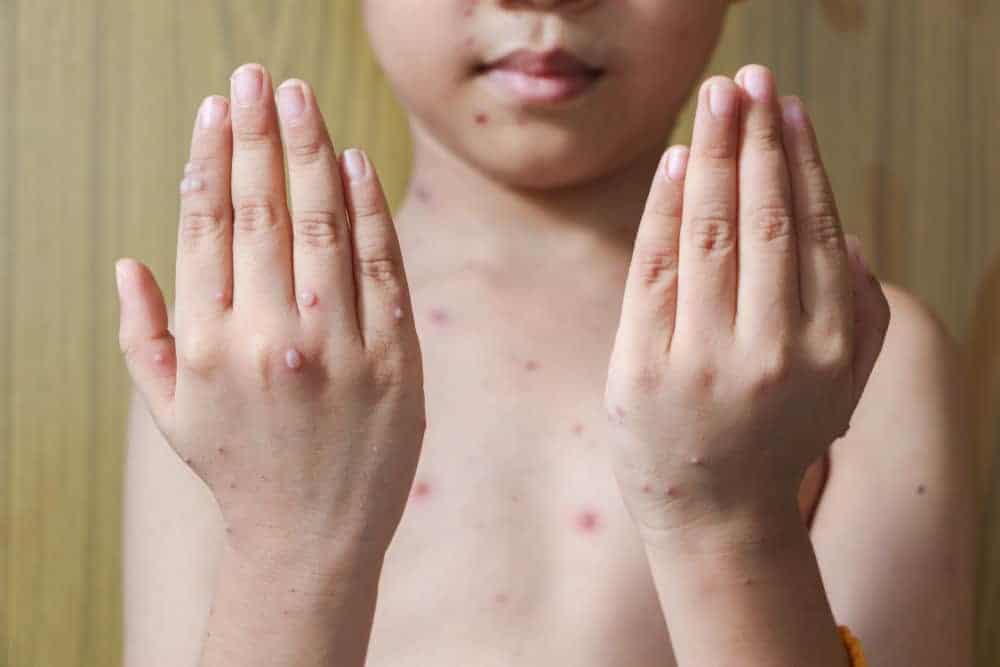 Chickenpox is a contagious disease that commonly occurs to children. Children who are infected with chickenpox need to rest at home to recover faster and prevent transmission of the disease to others. What are the causes, characteristics or symptoms of chickenpox in children? Here’s everything you need to know, especially what to do for chicken pox treatment.

Why Does Chickenpox Happen?

The cause of chickenpox in children is exposure to the herpes varicella-zoster virus. This virus is transmitted through droplets from an infected person’s mouth when coughing or sneezing.

Apart from saliva, the virus can also be transmitted and transferred through the fluid in chickenpox spots. The virus will remain contagious until all the blisters on the patient’s skin dry up.

Bulutong Ba Yan? What To Do When You See Chickenpox Rash

What Are the Signs and Symptoms of Chickenpox in Children?

The symptoms of chickenpox usually only appear 4-5 days after the child develops a fever.

In contrast to measles, the rash and watery spots of chickenpox appear within 10-21 days after the child is first exposed to the virus.

Some of the signs and symptoms of chickenpox in children that you should pay attention to are:

After a few days or weeks, the watery blisters will dry out, peel off, and become scabs. And after the smallpox spots or blisters all come out within a few days, the fever will begin to decrease.

It is possible that your child will not develop a fever on the first day of chickenpox or if the spots are not too severe.

When Should You Take Your Child to the Doctor?

Chickenpox in children does not require special medical treatment. However, your child will experience considerable discomfort.

Some conditions that require you to immediately consult a doctor are:

Generally, the diagnosis of chickenpox is fairly easy. The doctor will perform a physical examination to identify the symptoms of chickenpox.

Next, the doctor will prescribe chicken pox treatment and medications that help relieve symptoms and shorten the phase of disease progression.

Can Chickenpox in Children Have Complications?

Parents need to know that chickenpox can be a serious disease for anyone when complications occur. The same is true for infants, adolescents, adults, pregnant women, and people with weakened immune systems.

Some complications that can occur are:

What Is the Chicken Pox Treatment for Children?

There are several methods of chicken pox treatment.

First, consult a doctor to get chicken pox treatment medicine for children.

Although this disease can subside on its own, children can experience severe discomfort with the symptoms of chickenpox.

In addition, if parents let chickenpox resolve on its own, it can, at times, lead to complications such as secondary bacterial infections of the skin.

The following can be done at home as chicken pox treatment:

Acyclovir is an oral antiviral prescription drug that is best given within 24 hours of the first symptoms of chickenpox appearing.

According to research in the New England Journal of Medicine, acyclovir can reduce the number of smallpox blisters and shorten the time of illness. However, the complication rate of chickenpox cannot be reduced.

In addition, Acyclovir should be used routinely for five consecutive days. This drug is reported to have few side effects.

Acyclovir can also be used in children who have a deficiency in the immune system, are taking steroids, or have pre-existing skin diseases or weakened lung conditions.

Give acetaminophen as a chickenpox medicine to the child for the first few days if he shows symptoms of fever.

However, do not give ibuprofen because it is feared to cause the risk of severe secondary strep infection side effects.

Do not give aspirin to toddlers and small children with chickenpox because a possible side effect is brain damage.

The rash or spots of chickenpox can cause itching, so your child will often scratch certain parts of the skin.

In fact, there is a risk of complications due to constantly scratching the skin affected by chickenpox, namely impetigo, a skin infection by bacteria. Therefore, stopping the habit of scratching is the first step to chicken pox treatment. You can do this through the following methods:

Cold water acts as a compress that relieves itching and redness caused by chickenpox. Encourage your child to soak in cold water for at least 10 minutes every four hours for the first few days.

Bathing is safe as a chicken pox treatment. Chickenpox is only transmitted through the air, not water.

To prevent the chickenpox spots from breaking, do not rub with a towel when drying. Gently pat the body instead.

After bathing, you can apply cold powder or lotion (calamine) to relieve itching.

If the child complains of itching that is so severe that it interferes with sleep, give an over-the-counter oral antihistamine drug from the pharmacy.

A high body temperature, pain, and discomfort will also make it difficult for children to eat. And if chickenpox spots also appear in the mouth and throat, your little one will have a hard time swallowing food.

As a chicken pox treatment for children, give them plenty of fluids to avoid dehydration.

If you have babies who are still actively breastfeeding, continue to breastfeed them regularly.

Avoid giving food that has a strong, salty, sour, or spicy taste because these can make the mouth feel sore. Soft, smooth, and cold foods (such as soups, fat-free ice cream, puddings, jelly, mashed potatoes, and porridge) may be the best choices when your child has chickenpox.

6. Give Your Child Sufficient Rest

In addition to meeting the fluid and nutritional needs of your chlid, make sure they get enough rest.

Rest can help in the process of regenerating white blood cells that play a role in the immune system to fight infection. In addition, resting at home for a week can also prevent the transmission of chickenpox.

7. Overcoming Pain in the Genitals

Pain from chickenpox is common in the genitals and can be very painful for your child.

If your child is a girl and complains of unbearable pain, parents can apply a local anesthesia through an ointment containing 2.5% xylocaine that is sold over-the-counter at pharmacies.

Apply this ointment every 2-3 hours, to relieve pain. A cold soak will also be very helpful.

Will Chickenpox Scars Go Away?

Chickenpox usually doesn’t leave permanent marks on the skin. However, if the child continues to scratch the chickenpox spots until it causes sores and becomes infected, it may cause impetigo, a bacterial skin infection.

It should also be noted that getting rid of smallpox scars takes a long time, at least 6-12 months.

Can You Prevent Chickenpox in Children?

Prevention of this disease can be done through the chickenpox vaccine. Doctors recommend that children get this type of vaccine as soon as possible.

Vaccines can also be given to relieve the severity of chickenpox in children, especially when symptoms interfere with the child’s activities. In such cases, make sure your child gets the vaccine no later than five days after first contact with the virus.

Contact your pediatrician or visit the nearest health service center to learn more about the chickenpox vaccine.

In addition to vaccines, chickenpox prevention can also be done by avoiding people who have this disease.

Chickenpox usually only occurs once. After that, the child’s body has immunity against the chickenpox virus in the body for life. It is very rare for chickenpox to recur in adulthood.

HOW TO CARE FOR CHILDREN WITH CHICKENPOX, https://www.aad.org/public/parents-kids/childhood-conditions/chicken-pox, Accessed December 7, 2021

The Chickenpox Vaccine: What To Know Before Giving It to Your Child

That's Not Chickenpox: Learn About Mumps Symptoms and Treatment