Measles in Children: What Parents Need to Know 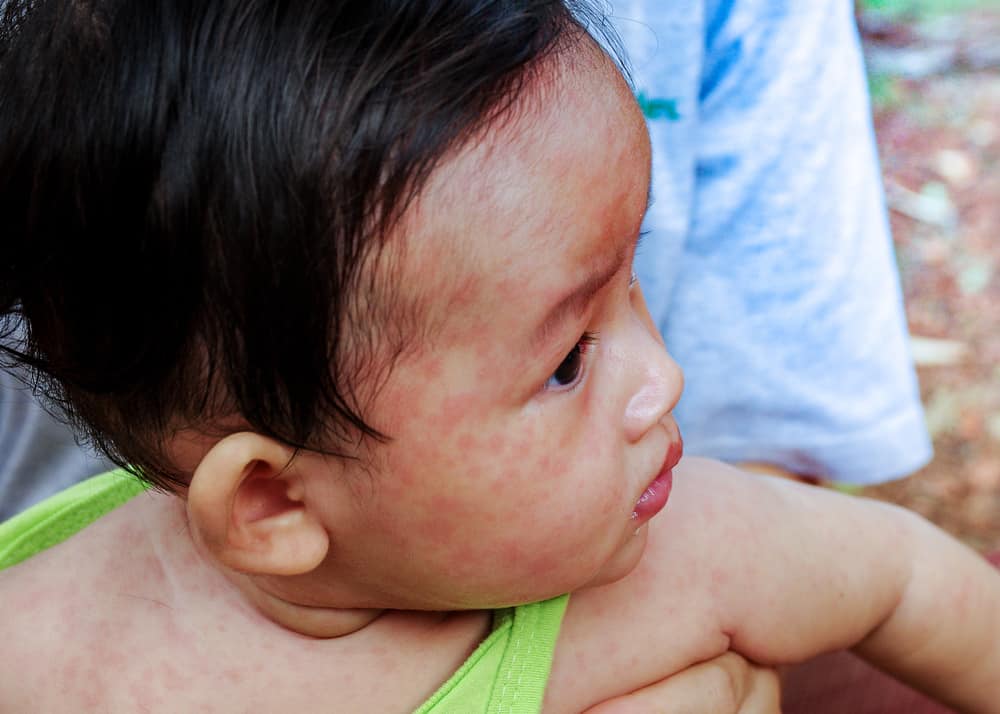 Measles or rubeola is an illness caused by a virus belonging to the paramyxovirus.

In 2018, the World Health Organization (WHO) recorded 140,000 measles-related deaths globally. Although most of these deaths were among children under the age of five, adults can also contract this disease.

The vaccine for measles was produced in 1963. Before that, a measles outbreak occurred every two to three years. Measles outbreaks caused around 2.3 million deaths worldwide.

These numbers have decreased since then, and in some parts of the world, measles have been totally eradicated.

Just recently, measles outbreaks have begun to occur again, because of a rise in people who have not received the vaccine against the disease.

Learn more about the virus, how potentially it can be life-threatening to people of all ages due complications such as diarrhea (dehydration) and pneumonia, and measles treatment and prevention measures.

How is measles transmitted?

This virus mainly infects the respiratory system, immune system, and the skin.

Once a person becomes infected with measles, the virus can live in the mucus found in the throat or the nose. This means that an infected person can spread the measles virus through coughing and sneezing. The measles virus can stay in the air for up to two hours, which is why it is so contagious.

In fact, 90% of people who are exposed to an infected person will become infected with measles as well. That is if the people are not yet immune to the disease.

A person with measles typically develops a rash a few days after they have become infected. However, an infected person can already spread the disease four days before the rash appears and until four days after.

Common Childhood Illnesses in the Philippines

The symptoms of measles usually appear around 10 to 14 days after you have been exposed to the virus. You will not usually feel any symptoms during these days.

The usual early symptoms of measles are the “three Cs”:

But measles also causes other signs and symptoms. After the incubation period, a person infected with measles may start showing the following symptoms:

Although some people believe that you should not give a child a bath during a measles infection, a warm sponge bath may help alleviate other measles symptoms that may cause discomfort.

It is important to spot the early symptoms in order to get properly diagnosed by a doctor and to receive measles treatment and prevention tips to avoid infecting others.

It is possible to be completely immune to the disease. A person who has already been infected with measles is less at risk of developing the condition. This is because the body has already learned to fight the virus that causes measles. People who have received the complete vaccination for measles are also less at risk.

The risk factors for measles include:

Also, just because you get the measles vaccine does not mean you are completely immune to the virus. Some people who have had the vaccine can still get infected, though the chances are very low.

The treatment for measles is mostly supportive, since the body is mostly capable of fighting off the infection on its own. However, it is important that the symptoms are treated to prevent further complications. Infections of the ears and eyes are usually treated with antibiotics.

How does measles Treatment and prevention differ for adults and children?

Measles treatment for babies or adults does not differ much, doctors will always recommend giving the patient a lot of fluids and making sure that they get enough rest. Children diagnosed with measles are also advised to take two doses of Vitamin A to make up for the loss that happens during measles infections.

One of the best measles prevention measures is routine vaccination. The Measles, Mumps, and Rubella (MMR) vaccine is one effective way to prevent the disease.

Other ways to prevent getting contracting the disease:

Measles is a contagious disease that primarily affects the respiratory system and causes symptoms like fever and rashes. Luckily, a vaccine for measles is already available to prevent this disease.

If you would like to know more about how you or your child can avail of the vaccine for measles and get more info about measles treatment and prevention, consult your doctor.

An Evolving Situation: Measles and the 21st Century Vaccination Crisis

Measles virus: A pathogen, vaccine, and a vector https://www.ncbi.nlm.nih.gov/pmc/articles/PMC4514292/

Getting Measles After Vaccination: FAQ https://www.mayoclinic.org/diseases-conditions/measles/expert-answers/getting-measles-after-vaccination/faq-20125397

Vitamin A for Measles in Children https://www.cochrane.org/CD001479/ARI_vitamin-a-for-measles-in-children

Common Childhood Illnesses in the Philippines