Neonatal Acne: Why Does My Newborn Have Pimples? 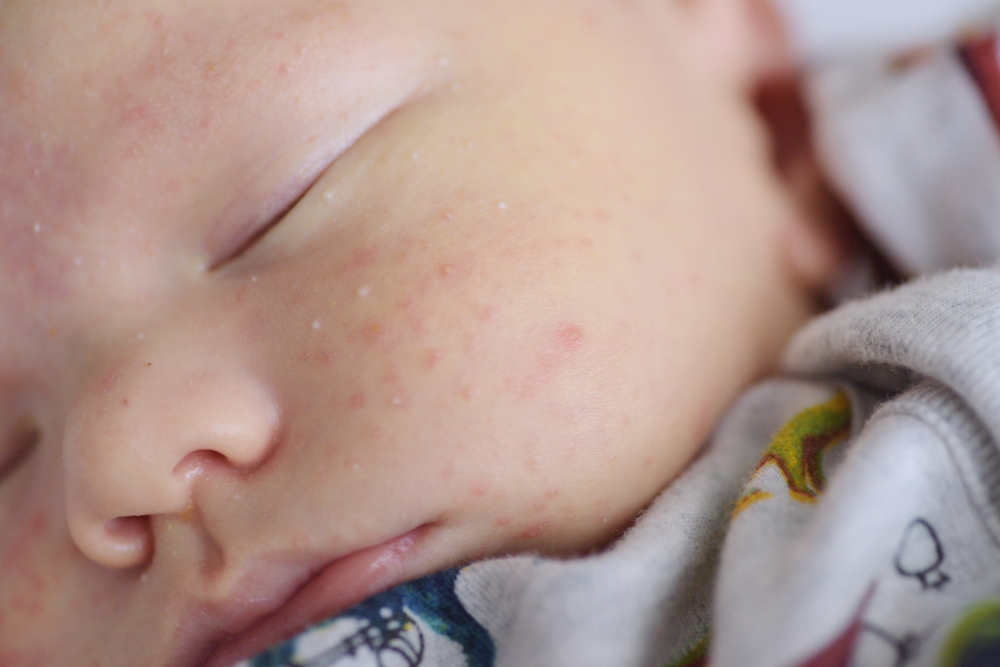 Acne is something we mostly associate with teenagers and adolescents. So it can be surprising when mothers observe a rash that looks like acne on their newborn’s skin. Dealing with acne as a teen or adult is often unpleasant, but what happens when acne appears on those who can’t do anything about it? This is what happens with neonatal acne.

By definition, acne is a skin condition that happens when hair follicles become plugged with oil and dead skin cells. Acne causes blackheads, whiteheads, and pimples. Although most commonly seen in teenagers, acne actually affects people of all ages.

Acne usually appears on the face, forehead, chest, upper back, and shoulders. These areas have the most sebaceous glands (oil glands) and hair follicles are connected to those oil glands.

Acne can be the cause of emotional distress for people suffering from it. Hormonal changes, individual diet, stress, and certain types of medication can trigger or make acne worse.

In contrast, neonatal acne is due mainly to a high rate of sebum excretion. Pathogenic mechanisms like these are normal for newborns. It can also be caused by infant or maternal hormones.

Based on a 2014 study, this condition is no longer considered to be rare. It affects 20% of infants younger than six weeks and is more common in boys. Having neonatal acne may also indicate the development of severe acne in adolescence.

In contrast with infantile acne, which happens in infants after six weeks of age, neonatal acne is not as inflammatory. Therefore, this condition does not require the vigorous therapy that infantile acne does.

Neonatal acne is mild; commonly small pimples, bumps or whiteheads will form on the baby’s face, possibly with a reddish rash. And it will go away on its own, without treatment, in a few weeks.

Your baby may become fussy when the rash comes in contact with clothes or baby wipes, but otherwise they will experience little discomfort.

A variant of neonatal acne is neonatal cephalic pustulosis. This involves a pustular eruption on the face and scalp of newborn babies and usually happens around the third week after birth. Unlike neonatal acne, this variant has no comedones, a.k.a. blackheads or whiteheads.

How To Treat Neonatal Acne

While neonatal acne presents inflammatory papules and pustules, it tends to resolve itself by four months of age. It rarely requires treatment, although topical creams are effective when needed. In contrast with infantile acne, neonatal acne does not result in scarring.

While regular acne can be triggered by hormonal changes, diet, stress, and certain medications, this condition does not involve hair follicles being clogged by oil and dead skin cells. It affects 20% of infants younger than six weeks and is due mainly to a high rate of sebum excretion.

If you see signs of acne on your newborn, there’s nothing to be worried about. This is a common condition for babies in their early weeks, and it will go away on its own after a few weeks. Parents don’t need to worry about treatment either, as regular skincare should be sufficient. If the rash doesn’t go away or if the acne forms blackheads or pus-filled bumps, make sure to consult your pediatrician.

Everything You Need to Know About Neonatal Pneumonia