Newborn Skin Peeling: Is It Normal? 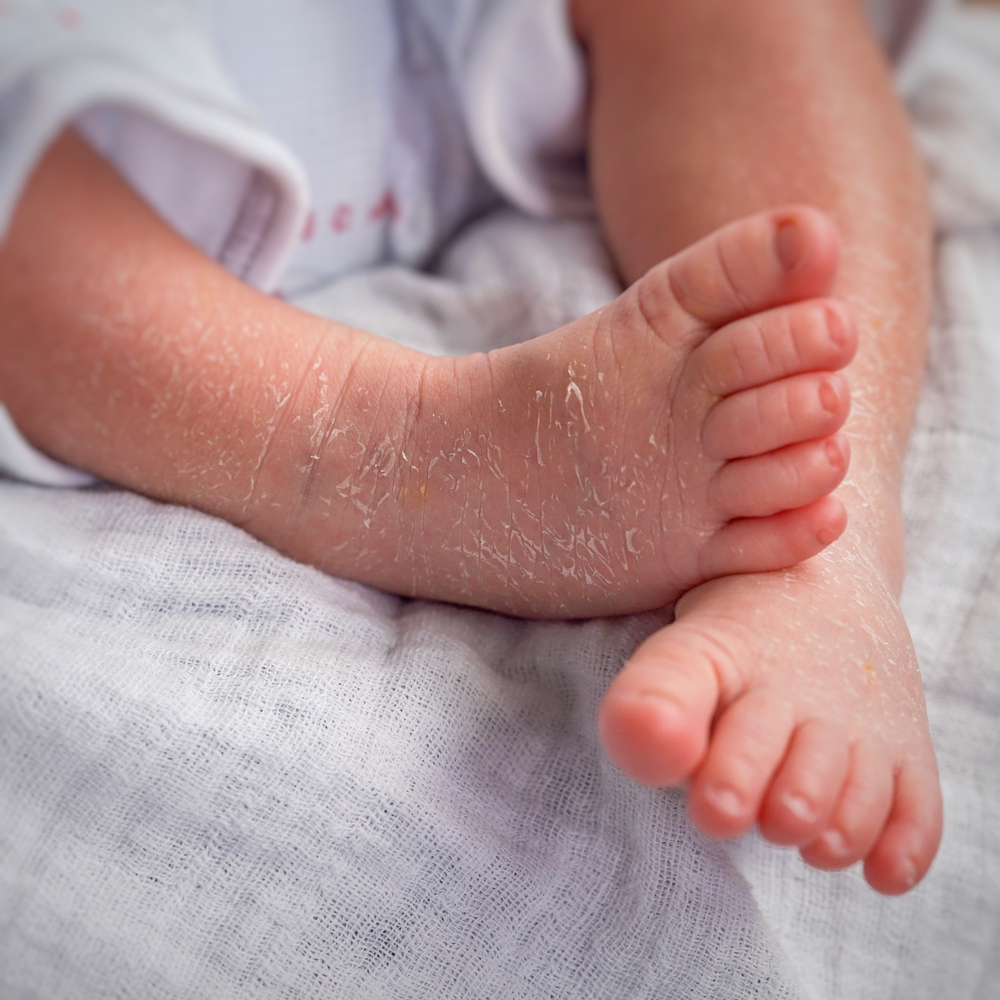 Most of us associate newborn babies with soft, perfect skin. After all, numerous advertisements over the years have touted the notion of skin as soft as a baby’s. Thus, some parents might be surprised to learn of newborn skin peeling soon after their baby is born. Newborn skin peeling is a perfectly normal occurence which happens for a number of reasons. Let’s take a closer look.

The skin of a newborn is covered by the protective vernix caseosa at birth. This waxy layer has lubricating and antibacterial features.

As babies adjust to a new environment, rashes are very common in newborns. This is particularly true during the first four weeks of life. Most of these rashes and skin conditions are harmless and fade away with little or no treatment. And although neonatal skin conditions are normal, it is still ideal that parents be able to tell the difference between harmless skin conditions and rashes that may need medical attention.

Newborn skin peeling is one of these harmless skin conditions. The top layer of a newborn’s skin flakes off shortly after they are born as part of their natural development. Dry, peeling skin might be noticeable for the first few weeks.

Peeling skin pertains to the loss and damage of the epidermis or upper layer of skin. Aside from peeling naturally, it can also develop as a result of direct skin damage such as through sunburn or infection. The newborn’s skin might also be covered by fine, downy hair at birth. Known as lanugo, this hair on the back and shoulders is most common in premature babies. It usually doesn’t last past several weeks.

At times, peeling skin can also be an indication of a problem with the immune system or another illness. Rashes, dryness, irritation, and other skin problems can be the result of peeling skin. It is usually uncommon for newborn babies born over their due date to endure painless skin peeling.

While newborn skin peeling is normal, some forms of peeling are not. Peeling skin syndrome (PSS) is a group of rare inherited skin disorders. The normal gradual process of invisible shedding of the outermost skin layers is hastened and/or aggravated in these cases.

PSS is characterized by painless, continual, spontaneous skin peeling (exfoliation). A separation of the outermost layer of the epidermis from the underlying layers is the cause. Peeling skin syndrome is variously known as keratolysis exfoliativa, congenital deciduous skin, and familial continual skin peeling.

As of now, researchers have identified genetic changes in several distinct genes as the cause of peeling skin syndrome. All known forms of the disease have been inherited in an autosomal recessive pattern. This means the baby inherits two abnormal copies of the disease gene, one from each parent. There is usually no peak season for the peeling. However, some patients have reportedly had it worse during the summer.

Applying skin softening ointments is advisable after a bath. The skin is still moist at that point. Plain petroleum jelly or Vaseline can offer relief. Drugs derived from vitamin A, such as tretinoin and etretinate, could also be effective. Consult your doctor for more information.

While rashes and other skin conditions are fairly normal for newborn babies it would still help for parents to be able to differentiate newborn skin peeling from the less common variety. When a child emerges from the womb, vernix caseosa covers their body. That layer usually peels off soon after birth but dry, peeling skin might still be noticeable for the first few weeks.

On rare occasions, some infants may be manifesting symptoms of peeling skin syndrome. This happens when the baby inherits two abnormal copies of the disease gene. Skin softening ointments, petroleum jelly, and drugs derived from vitamin A should prove effective in soothing their skin.

What a newborn really looks like, https://www.mayoclinic.org/healthy-lifestyle/infant-and-toddler-health/multimedia/newborn/sls-20076309?s=4, Accessed January 19, 2022

What Is the Best Diaper Rash Treatment? Find Out Here

Why Bonding with Your Baby During Pregnancy Matters