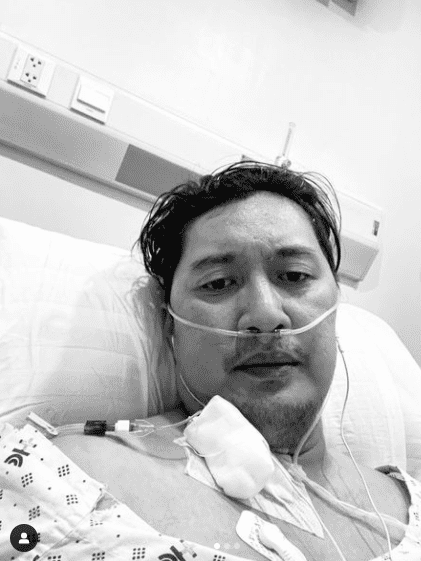 GMA News reporter and Sumbungan ng Bayan host Oscar Oida has been released from his nearly two-week stay at the hospital in Quezon City due to leptospirosis. He continues to get leptospirosis treatment from his doctors.

Oscar started showing symptoms the day after his coverage in Payatas, Quezon City last February 15, 2022. He visited the women who make rags, which Vogue magazine featured as woven textiles being produced as T-shirts.

According to his wife, MJ, Oscar is typically in good health. He does not have any illness and is very careful whenever he leaves the house due to the threat of COVID-19. So, it came as a surprise to her that her husband had an unexpected high fever on February 16th.

She also added that Oscar’s temperature doesn’t go down, only ranging from 39.5°C to 40.2°C. Aside from that, he was also already vomiting, so she decided to take him to the hospital. However, they had a hard time finding one since there were no vacant rooms available until they were able to seek help from a doctor-friend at Diliman Doctors Hospital. She mentioned that it was Dr. Camillo from the TV show Pinoy MD who was his head doctor.

Oscar’s fever, vomiting, and delirium were the reasons why he was admitted to the hospital’s intensive care unit (ICU). The doctor also started a dialysis treatment for him on February 20. In addition to that, he underwent various tests to diagnose his illness.

MJ then shared that it was Dr. Daisy Tagara, an infectious disease doctor, who confirmed the infection. Dr. Tagarda said that it was leptospirosis since the onset of his symptoms lasted for 48 hours.

Oscar also had other doctors treating him. The team of doctors included a nephrologist, neurologist, cardiologist, pulmonary specialist, and infectious disease specialist. He also developed pneumonia during the time being, hence needing to treat it as well.

Worried About Pneumonia, Too? Try Our Risk Screener Below:

MJ also expressed that it was highly possible that her husband got it from the rag factory he visited prior to the onset of the symptoms.

What You Need to Know About Leptospirosis

Leptospirosis is a bacterial infection that can affect both humans and animals. It is the bacteria of the genus Leptospira that causes a wide range of common symptoms such as:

Some people may take some symptoms for other kinds of diseases. But, there are also those people who may not show symptoms at all.

A person may get the infection if they come in contact with either of the two:

Bacteria can enter the body through the skin or mucous membranes, like the eyes, nose, or mouth, particularly if the skin is open due to a cut or scratch.

The time between being exposed to a contaminated source and becoming ill ranges from 2 days to 4 weeks. The onset of illness is usually abrupt, with fever and other symptoms.

Leptospirosis can manifest itself in two stages:

Updates from Oscar and MJ on His Recovery

MJ shared on her Instagram post that the last two weeks were both “traumatizing” and “difficult,” to say the least. But it was through the prayers, support, and encouragement from everyone that they were able to overcome the health ordeal.

“God is SO good & now we are home and Oscar is recuperating while on bed rest for the next weeks. Please continue praying with me for @oscaroida’s COMPLETE recovery,” she said on her post.

He ended the caption by thanking the Lord for “giving him another chance in life.”

Are Swimming Pools Safe from Amoebic Meningitis Infection? : All You Need To Know