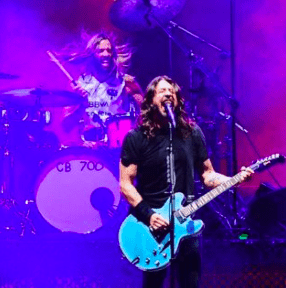 Foo Fighters’ frontman Dave Grohl went to “The Howard Stern Show,” together with his bandmate Taylor Hawkins. From there, he revealed that he has been reading lips for almost 20 years now due to concert-related hearing loss. The former Nirvana drummer and Foo Fighters singer previously shared that he is going deaf in his left ear as a result of decades of stage performance.

Dave Grohl Opens Up About His Hearing Loss

“I haven’t had them tested in a long time — I mean, I know what they’re gonna say,” he answered when asked about having his ears checked by the doctor. “‘You have hearing damage tinnitus in your left ear, more so than your right ear.'”

He told Howard that it was challenging enough to hear other people in public places, but even more this pandemic. He revealed that wearing of mask took away his reliance on lip-reading.

“If you were sitting next to me right here at dinner, I wouldn’t understand a f—ing word you were saying to me, the whole f—ing time,” he explained to Howard. “There’s no way. In a crowded restaurant, that’s worse. That’s the worst thing about this pandemic s—, it’s like, people wearing masks. I’ve been reading lips for like, 20 years, so when someone comes up to me and they’re like [muffled noise], I’m like, ‘I’m a rock musician. I’m f—ing deaf, I can’t hear what you’re saying.”

Dave also shared in the interview that he is suffering from a particular type of hearing loss called tinnitus. However, he mentioned that the tinnitus in his left ear is worse due to long years of drumming.

Despite his difficulty, he still refuses to wear in-ear monitors. When Howard asked

“I’ve tried the ear monitor thing before, a long time before, and the problem that I have with it is that it removes you from the natural atmosphere sound,” he said.

He also mentioned that he has little earholes that the monitors just tend to pop out when he puts them on. “And I don’t want to look like a praying mantis with these things all over my head,” he added.

Aside from that, he believes that wearing one removes him “from the natural atmosphere sound.” Moreover, “it messes with your spatial understanding of where you are on stage.” Thus, not being able to hear his bandmates.

For the past 31 years, he has been relying on the same monitor engineer to make sure the sound is perfect for him.

There are many different types of hearing loss, all depending on how it affects a person. According to the National Institute on Deafness and Other Communication Diseases, people typically describe tinnitus as ringing in the ears. But, it can also be any of the following:

It could also affect one or both ears through a soft/loud or high/low pitched sound.

Tinnitus is not a disease in itself, rather, it is a sign of auditory impairment. Tinnitus may be because of a piece of earwax blocking the ear canal. Or, it can also be due to a variety of medical conditions, such as:

Tinnitus is often the first sign of hearing loss in older adults. It can also be a side effect of certain medications. More than 200 drugs have been linked to tinnitus when started or stopped.

People who work in noisy environments — factory/construction workers, road crews, or even musicians — can develop the said hearing loss.

Tinnitus treatment is dependent on whether the possible cause (or the underlying health condition) triggers the symptom. Some of which may include:

Effects of Earphones on Hearing and Hearing Loss