Week 11 of Pregnancy: All You Need to Know 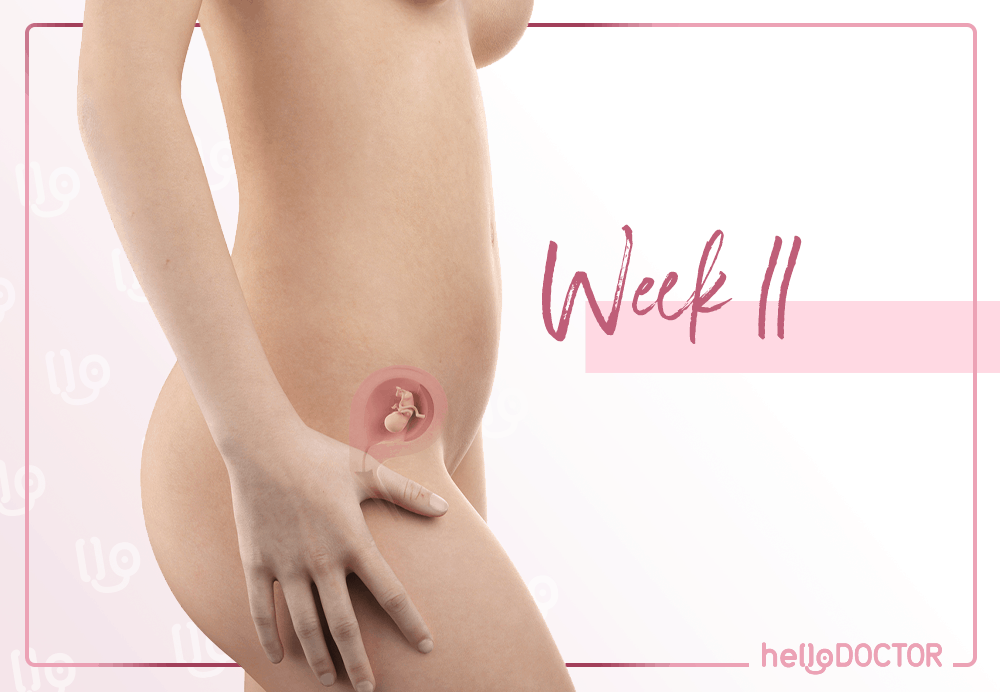 How is my baby growing?

At week 11 of pregnancy baby development, the fetus is approximately 1.5 to 2.5 inches long. The head accounts for about half of its whole length. Its weight is now about one-third of an ounce. During this time, the torso of the baby will be lengthening and its posture, straightening. The baby will soon be able to stretch and roll about inside the uterus. The development of the genitalia of the fetus will also be wrapping up around this time. However, the gender will not be visible on ultrasounds until 16 to 20 weeks. Despite this, if the baby is a girl, its ovaries are already developing.

At 11 weeks of pregnancy, the baby’s development includes the following:

Hair follicles are now forming and its head is currently the same length as its body.

Nipples are detectable at this stage.

The shape of the fetus’ ears is nearly fully developed.

Tooth buds continue to form (this is a development that began in the week 10), nasal passages are already open and the tongue is present

The baby’s hands and feet are now positioned at the front of its body, complete with individual fingers and toes. Nail beds are growing, while the bones start hardening.

How is my body changing?

During week 11 of pregnancy baby development, expectant mothers may experience a mixture of symptoms, some of which are beneficial. Thanks to hormones, these include brighter skin, fuller hair and stronger nails. Other symptoms include blemishes, unwanted hair growth, heartburn, morning sickness (characterized by nausea and/or vomiting), fatigue, and sore or enlarged breasts.

What should I be concerned about?

Without having morning sickness, you may be experiencing heartburn instead. Research shows that 95% of women experience nausea and vomiting and/or heartburn—two of the most common symptoms of pregnancy—during their gestation period. Despite their prevalence among pregnant women, these symptoms are generally harmless to the mother and baby. Some women have heartburn throughout the whole course of pregnancy, although it does get worse in the third trimester. This is due to the expanding of the uterus. Early prevention usually does the trick: eating smaller meals throughout the day and not plopping on the couch or lying down immediately after eating. If the heartburn prevents you from even eating, you may ask your doctor if you can take antacids.

Hormones account for the enlargement of a pregnant woman’s breasts. It may cause soreness. Another inconvenience is that bras no longer fit. Stretchy bras, sports bras or bra extenders are useful in remedying this issue.

What should I tell my doctor?

Ultrasounds are taken usually on weeks 11 to 14 in order to assess the baby’s nuchal translucency, which is how much fluid is behind the baby’s neck. This typically helps in testing for medical conditions such as Down syndrome.

What tests should I know about?

Another test offered to pregnant women during weeks 10 to 12, is called chorionic villus sampling (CVS). CVS is usually offered to those who have abnormal screening results, are 35 years or older, or have a history of chromosomal abnormality found in pregnancy or a family history of some genetic abnormalities.

CVS is used to assess genetic abnormalities: Tay-Sachs disease, cystic fibrosis, and chromosomal disorders such as Down syndrome, to name a few. In this test, a sample of placental chorionic villi is removed and tested.

What should I know about being healthy and safe while pregnant?

During pregnancy, and not just during week 11 of pregnancy baby development, it is important that an expectant mother’s lifestyle be adjusted for the good of the baby’s health. Drinking alcohol, smoking, ingesting drugs and other toxic substances are strongly discouraged. Any medication you are or have been taking should be run by your attending physician to ensure if they are still safe to take. A healthy, balanced diet is key if taken in tandem with prenatal vitamins (primarily folic acid). Exercise is also an option—discuss with your doctor what routines or regimens are appropriate for you.

Apart from these, daily intake of calcium supplements is recommended as the Food and Nutrition Research Institute of the Department of Science and Technology (FNRI-DOST) of the Philippines cites calcium as the least-consumed micronutrient in the Filipino diet.

Another recommendation of the institution is to up the intake of iodine. Low urinary iodine excretion is an issue among pregnant and lactating mothers. This points to a lack of iodine intake, which is essential during pregnancy as it aids in brain development of the fetus. Lactating mothers, meanwhile, need iodine in their breast milk. FNRI-DOST released an updated version of the Nutritional Guidelines for Filipinos, outlining the nutrients necessary for a healthy body.

Hello Health Group does not offer any advice, diagnosis or medical treatment.

Week 10 of Pregnancy: All You Need to Know