Breast Milk For Rash Treatment: Is It Possible? 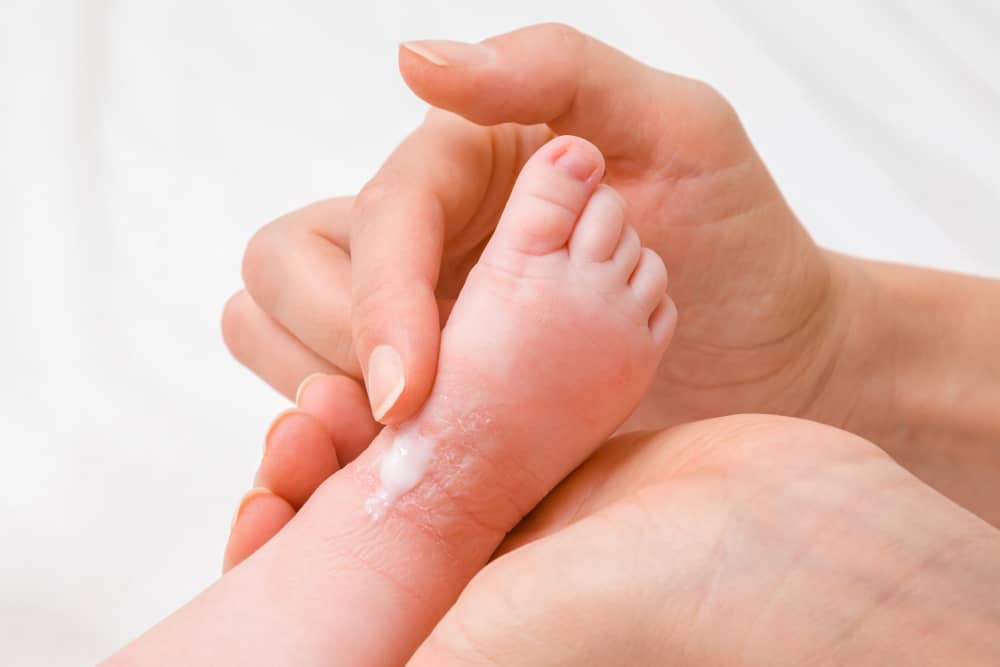 A lot of mothers decide to breastfeed their babies because they understand that breast milk contains a lot of nutrients that are beneficial for the newborn. For instance, babies who exclusively get their nourishment from breast milk for the first six months of their life experience appropriate growth and development, fewer infections, and fewer bouts of diarrhea. But what if you apply breast milk on your baby’s skin? Will using breast milk be an effective rash treatment?

Since doctors always emphasize that babies have sensitive skin, parents cannot help but worry when they see rashes on their newborns.

The thing is, it’s sometimes normal for babies to develop skin rashes. In fact, many of the common baby skin rashes are not harmful and can even be treated at home.

One example is diaper dermatitis or diaper rash. It happens when the baby’s skin is exposed to a dirty and wet diaper for long periods. The prevention for diaper rash is frequent nappy changes and applying a prescribed diaper rash ointment or cream on the skin.

Now, here’s an interesting note: Some mothers us breast milk for their baby rash treatment and claim that it’s effective.

Before we discuss what the studies say about the effects of breast milk as rash treatment, let’s first analyze the nutrients in breast milk that can potentially help improve skin rashes.

According to many experts, breast milk has anti-inflammatory properties. Some of its proteins can help fight viruses and bacteria and it even contains growth factors that can enhance wound healing.

These properties make it an effective treatment for sore, cracked nipples. Researchers(1) even claim that breast milk’s healing properties are comparable to that of lanolin, a known moisturizer for cracked lips or nipples.

But will breast milk exhibit the same healing properties when it comes to a newborn’s skin rash?

Everything You Need to Know About Breastfeeding

Breast Milk for Rash Treatment – Is it Effective?

Because many mothers testify that breast milk is effective for rash treatment, researchers have tried to prove the claim by conducting several studies.

The research titled, Milk Therapy: Unexpected Uses for Human Breast Milk (2), reviewed several papers about breast milk and baby skin conditions. However, they found the results to be inconsistent.

In one paper they reviewed, the researchers suggested that it’s ineffective in treating atopic dermatitis (eczema). However, the reviewers noted that the particular research has many limitations. For one, it only had 6 participants.

Furthermore, two of the participants received breastmilk that was meant for younger babies. This means that 2 of the subjects were no longer newborns; they were, in fact, already 18.5 years old.

The Effects of Breast Milk on Atopic Dermatitis

One randomized trial (3) that divided the infant participants with atopic dermatitis into two groups. In one group, they asked the mothers to rub breast milk on their baby’s skin after each feeding. The other group received hydrocortisone cream as treatment.

In the end, they concluded that there was no significant difference between the effects of human breast milk and 1% hydrocortisone when it comes to treating mild to moderate atopic dermatitis.

The Effects of Breast Milk on Diaper Rash

Aside from atopic dermatitis, some researchers also assessed the effects of breast milk as a diaper rash treatment.

In one trial (4), the researchers divided 30 infants with diaper dermatitis into 2 groups. They asked the mothers in the experimental group to rub breast milk on the skin 3 times a day. The control group did not receive any treatment.

When another study (5) tried to compare the healing effects of human breast milk and barrier cream for diaper rash, the results showed that barrier cream was more effective.

The Effects of Breast Milk for Baby Acne

Some websites and parenting blogs suggest that breast milk is also effective in treating baby acne. According to different claims, rubbing breast milk on the baby’s acne-affected face improves the condition.

Acne skin rash occurs due to the newborn’s exposure to their mother’s hormones while they were still in the womb. It doesn’t need treatment. Doctors highlight that they will clear eventually. The only thing they advise parents to do is to wash their baby’s face once a day with mild soap and water.

The problem is, unlike atopic dermatitis and diaper rash, there’s still no study about the effects of breast milk on baby acne. Some experts “support” the idea by pointing out the chemicals in breast milk that could help, but other than that, the only thing we have online are parent testimonials.

Why is Breast Milk Still the Best for Babies?

If parents will do online research about the topical use of breast milk for babies, they’ll find a lot of references saying that it’s an effective treatment for conditions such as diaper rash and dermatitis.

However, don’t forget that the best way to treat any skin condition is to consult a doctor. This is most especially true in babies, since they have sensitive skin and are still developing their immunity against certain allergens.

Baby Poop Color and Consistency: All You Need to Know