What Is The First Sign Of Meningitis? What To Watch Out For 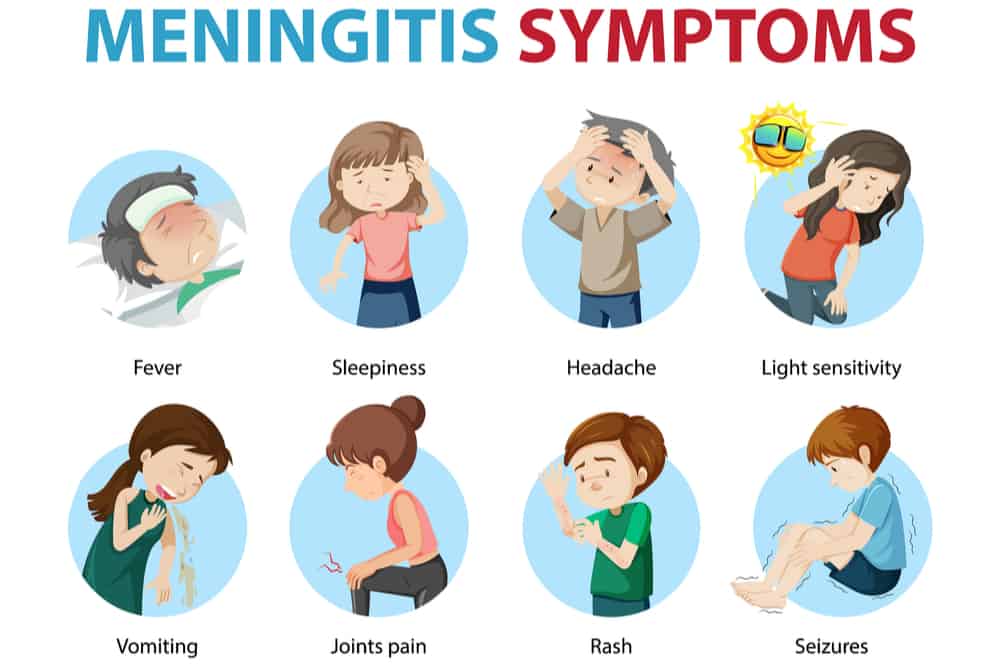 Meningitis is an infection that causes the membrane protecting the brain and spinal cord (the meninges) to swell. This may be caused by bacteria, viruses, injuries, cancer, medication, and other sources.

Meningitis is potentially life-threatening. Symptoms can escalate fast without early diagnosis and treatment. Following this, it is important to quickly identify your symptoms correctly.

Everyone is at risk of meningitis. In the first few hours of infection, the patient may display several flu-like symptoms. These symptoms may develop over several hours or days depending on what caused the infection.

Symptoms may vary depending on the age group. Here are the early signs of meningitis you should not ignore:

Here are the first signs of meningitis in infants:

The risk of meningitis in toddlers is higher than infants. This is the stage where your child is likely to touch, grab, or try to swallow what is in their surroundings, including toys and dirt. Supervise your child’s playtime especially if they are playing outside. If you notice these following symptoms, seek medical help immediately:

Fever in Kids: When To Worry and Other Warning Signs

What is the first sign of meningitis when it comes to the elderly? It is often difficult to identify the first signs of meningitis with older people. In most cases, they could be experiencing some of the symptoms as a result of other complications and health conditions. The most definite symptom that can be associated with meningitis is confusion. Here is list of the symptoms you should pay attention to regarding older people:

If you observe any of these signs and symptoms, it is best to see your doctor immediately.

Meningitis can eventually lead to death when not met with proper treatment and medication. Delayed diagnosis may lead to permanent brain damage, hearing loss, or learning disabilities.

Do not skip vaccines that help prevent meningitis. Good hygiene and a healthy lifestyle can reduce the risk of being infected. Watch what you eat, and keep your surroundings clean and germ-free. Remember, meningitis is potentially deadly. Trust your instincts and don’t wait for the symptoms to become severe and life-threatening.

The early signs of meningitis include high fevers, severe headaches, and confusion. Early identification of meningitis is key to ensuring successful treatment.

I Have a Splitting Headache: Types of Meningitis and Their Causes