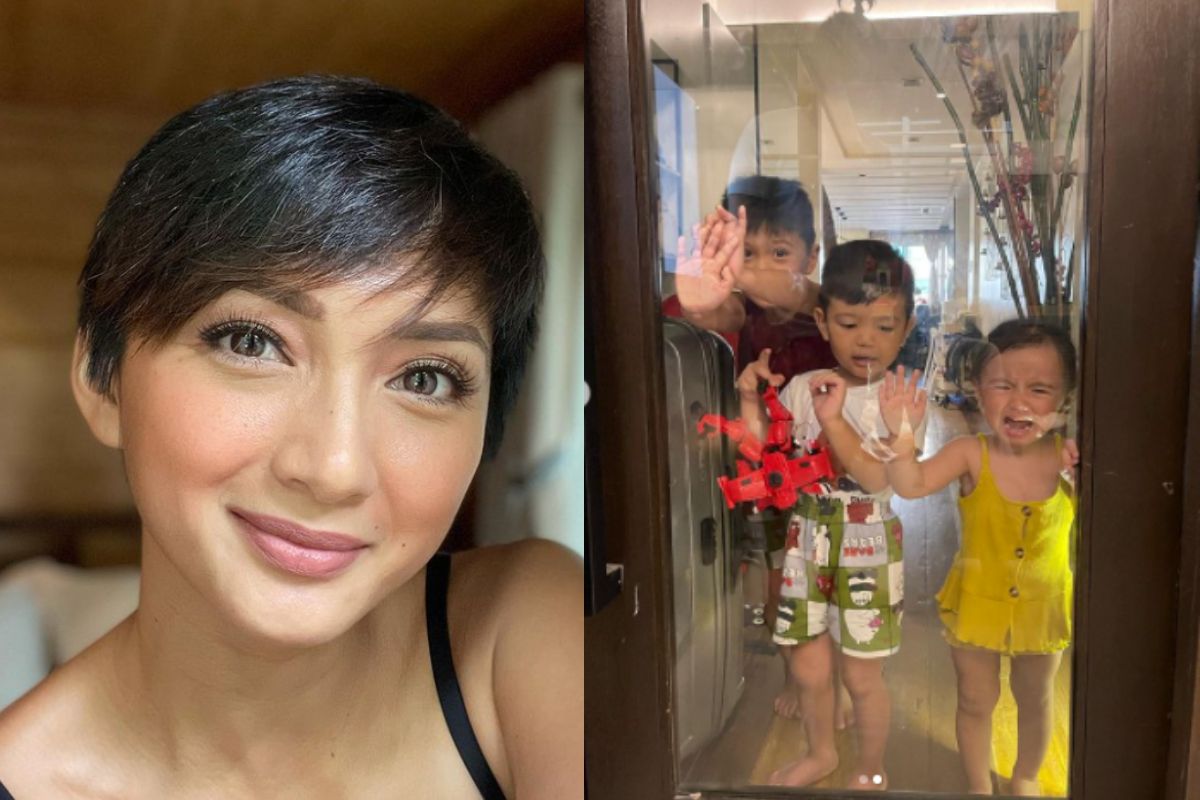 With the most recent spike in COVID-19 cases in the Philippines, people are once again anxious about the pandemic. The arrival of the highly contagious Omicron variant has put a damper on people’s hopes for a better 2022 so far. As of January 11, 2022, 28,007 new cases were reported, bringing the total active cases in the country to 181,016. Even as the infections rise, members of households are being divided to avoid spreading the virus. These people are dealing with COVID anxiety firsthand.

Recently, actress and TV host Iya Villania-Arellano tested positive for COVID-19. She and fellow celebrity husband Drew Arellano made headlines the previous week by sharing that they were expecting their fourth child. However, her most recent post on Instagram revealed that the couple had contracted the coronavirus.

Their posts caught the attention of many because it showed their three children: Primo, Leon, and Alana, looking at them from a separate room while they isolate. “This post is for all mamas and papas that are going through the same thing, and have to endure not hugging and kissing their children,” Iya posted. “This was the hardest thing to accept upon learning I was positive (and I’m not taking about my pregnancy test).”

“Primo gets it, Leon is okay, too, because he follows his kuya’s lead, but Alana?” she went on. “Boy, it broke my heart to see her cry for me and not being able to console her even for a bit, so mamas in this same situation, you are not alone!” Since that initial post, however, Villania-Arellano bared on January 12 that eldest son Primo and one of their household help has tested positive.

The former commercial model also posted words of encouragement for people going through something similar. “My tip? Try not to cry! because the tears will only cause nasal congestion and lengthen recovery! I know, I know… ang hirap! Man, I CRIED! But you have to get over it as soon as you can and get in that speed car towards recovery for your family. Kapit, guys! There’s a whole bunch of us! We can do it!”

Other celebrities went into isolation

Former Miss Universe Pia Wurtzbach also recently tested positive for the coronavirus along with her sister. The beauty queen and commercial model was isolated with her sister and had symptoms of fever, sore throat, body pain, runny nose, and cough. She also lost her sense of smell and taste. Wurtzbach shared her gratitude that her parents are safe, and she did not get them sick before urging everyone to get vaccinated.

Underlining how quickly the coronavirus spreads, actress and model Ina Raymundo shared on Instagram that she too caught it. After her husband and five kids dealt with COVID-19, Raymundo was the last one to get it. They were not isolated from each other, and Raymundo was taking care of her family. Hence, it was almost inevitable that she would get infected.

Isolation can lead to anxiety

A cursory view of social media over the past two weeks will reveal other parents entering into self-quarantine after testing positive for COVID-19. To keep the rest of the household safe, they have chosen to isolate themselves for the seven days required of fully vaccinated individuals. Unvaccinated individuals or those who have not yet completed their vaccine requirements must isolate for 14 days.

It is only natural that these families feel some form of anxiety in isolation. The apprehension over the rising coronavirus cases is compounded with separation from the rest of the family. There is also the uncertainty of knowing whether or not they inadvertently passed on the virus to those family members. That would be enough to give anyone pause.

How to handle COVID anxiety

A study published in November 2020 examined 28 relevant articles related to COVID-19 fears. It noted that frontliners such as physicians, health care workers, police officers, and firefighters might be more able to deal with the pandemic given certain parameters. COVID-19 survivors, particularly those at risk and those with mental health problems, are at risk of developing post-traumatic stress disorder (PTSD). The following are some tips on how to deal with COVID anxiety brought on by the pandemic:

With the Omicron variant’s arrival in the Philippines, the number of people testing positive for COVID-19 continues to rise. Celebrities have not been spared, with several choosing to go into isolation for a few days to spare the rest of their family from the virus. That isolation can be difficult because of the feelings of separation it can cause, particularly for parents of very young children.

COVID-19 anxiety caused by exposure can happen, but there are ways to handle it. These include social support, positive refocusing, physical exercise, and constant communication.

On the Nature of Fear and Anxiety Triggered by COVID-19,

Experts Say 2022 Should Be About COVID Self-Test Kits

New COVID-19 Variant IHU: Is It Stronger Than The Omicron?