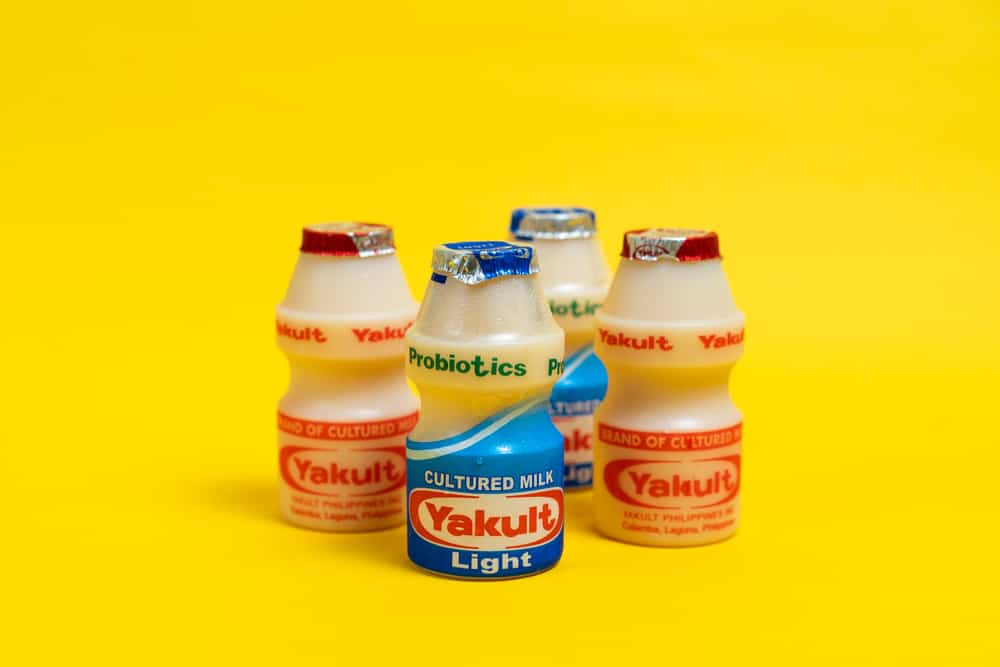 Many people who experience diarrhea rely on medicines, like loperamide, for quick treatment. Still, others want to address their loose bowel movement with probiotics as it seems to be a “more natural approach.” One of the most well-known brands of probiotics in the Philippines is Yakult. Now, the question is, can you take Yakult for diarrhea? Does it really help treat watery stool? Find out here.

Can You Take Yakult For Diarrhea?

Before anything else, let’s first ascertain whether it’s safe to take Yakult when you’re having diarrhea.

You see, Yakult is a fermented dairy product, and when a person has severe diarrhea, doctors usually ask them to avoid dairy products for a few days¹.

From Yakult Philippines’ official website, they stated that diarrhea can be caused by numerous factors (stress, antibiotic use, indigestion, food poisoning, etc.) that may disturb the balance in gut flora. Drinking Yakult can help restore the balance of intestinal flora. They also added that excessive drinking of Yakult will not cause diarrhea, but highlighted that a single bottle daily is enough².

Yakult for Diarrhea: Is It a Good Remedy?

Yakult is a probiotic drink containing 8 billion live Lactobacillus casei strain Shirota. There are scientific data proving that this probiotic bacteria reach the intestines alive, but can they help treat cases of diarrhea?

According to the Yakult-Sponsored Study in Vietnam

In a 12-week study sponsored by Yakult and now published in the European Journal of Clinical Nutrition, the researchers invited more than 1,000 participants aged 3 to 5 and divided them into two groups. One received a bottle of Yakult daily for 12 weeks; the other didn’t receive anything. Note that after the treatment, there was a 4-week wash-out period where they stopped taking the product.

Results showed that the incidence of diarrhea in the Yakult group dropped from 7.3% to 4.9%. Moreover, the effect persisted even after the wash-out period.

The incidence of diarrhea in the control group fluctuated slightly, but generally, it stayed between 7.9 and 8.1%³.

Based on these results, we can say that Yakult for diarrhea seems promising.

According to Other Studies

Other studies did not use Yakult in particular, but they reviewed 63 studies to check the effect of probiotics in treating diarrhea.

In the review with over 8,000 participants (mostly children), they noted that within 5 days:

This means probiotics made diarrhea go away faster for 21 out of 100 people⁴.

However, they recommend using probiotic strains with proven efficacy, such as Lactobacillus GG for the prevention of antibiotic-associated and infectious diarrhea.

Lactobacillus casei, which Yakult has, is included in the strains that have evidence in preventing daycare diarrhea.

Can you drink Yakult for diarrhea? Yakult says their product may help restore gastrointestinal flora during times when imbalances may occur. They also mentioned that excessive intake will not cause diarrhea, but highlighted that one 65 ml bottle containing live Lactobacillus casei strain Shirota daily is already adequate.

There’s also a study concluding that Yakult reduces the incidence of diarrhea in children. A review of 63 studies also noted that probiotics seem to help some people become diarrhea-free faster.

Still, note that Yakult shouldn’t be a substitute for medical treatment. If your diarrhea persists despite home remedies, please contact your doctor for appropriate treatment.

1 When you have diarrhea, https://medlineplus.gov/ency/patientinstructions/000121.htm, Accessed November 11, 2021

5 What is the efficacy of probiotics in the treatment of diarrhea?, https://www.medscape.com/answers/928598-25460/what-is-the-efficacy-of-probiotics-in-the-treatment-of-diarrhea, Accessed November 11, 2021

How Do Probiotics and Prebiotics Work Together?

The Health Benefits of Kimchi