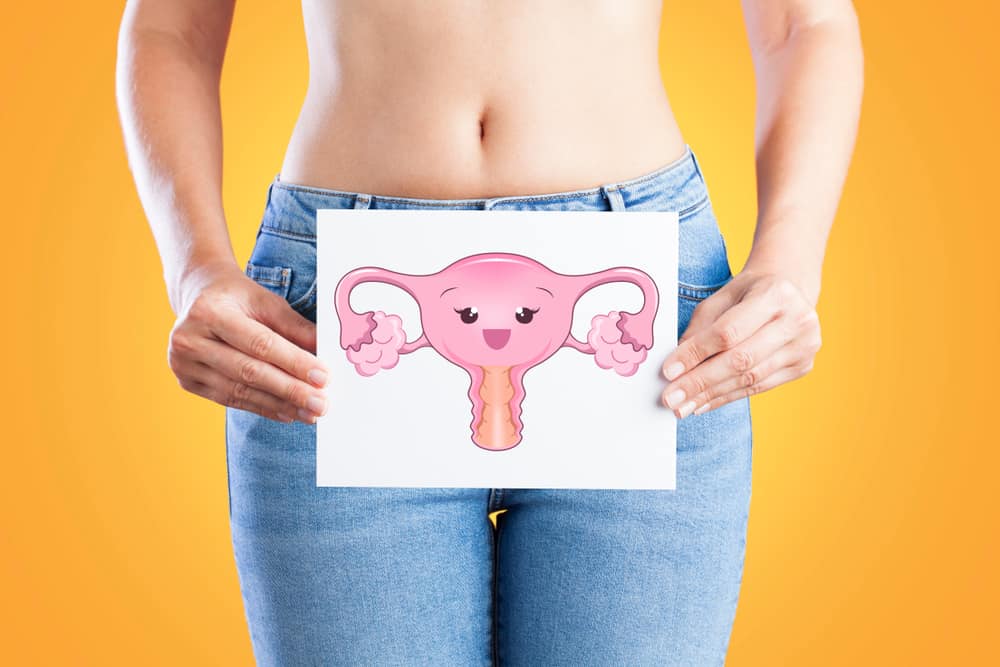 The uterus is part of a woman’s reproductive organ. It is important for menstruation, pregnancy, labor and delivery. The uterus is a hollow organ shaped like a pear, with a frontal area that has an inverted triangle shape.

It consists of four major parts:

What is the normal position of the uterus?

The terms “anteflexed” and “anteverted” uterus describe the forward tilt of the uterus with respect to the reference point–cervix and vagina, respectively.

In majority of the population, the uterus commonly lies in an anteflexed and anteverted position.

A retroverted uterus, otherwise known as a tipped uterus, is one that tilts backwards over the vagina. A retroflexed uterus is tilted backward over the cervix. Experts assure that this does not affect the sperm’s ability to reach an egg, thus does not affect your chances of getting pregnant.

An anteverted or anteflexed uterus are the most common positions, seen in about 50% of women. This is the usual position of a woman’s uterus.

On the other hand, 20% of women have a retroverted or retroverted uterus, which is considered a normal variant.

A study showed that caesarean delivery could cause an anteverted retroflexed uterus, compared to women who gave birth via other modes.

What are the symptoms of an anteverted/anteflexed uterus and a retroverted/retroflexed uterus?

Often, an anteflexed, anteverted uterus do not cause any symptoms.

However, this also depends on the degree of orientation and inclination of the uterus. If you have an anteverted or anteflexed uterus, you may feel some localized pressure or pain at the front of your pelvis. A retroverted uterus also does not cause much problems, but it is sometimes associated with dyspareunia (painful sex) and dysmenorrhea (painful menstruation).

You should immediately contact your doctor and inform him or her of any pelvic discomfort or pain you are experiencing.

Most women are born with an anteverted or anteflexed uterus, and this is seen as the most common uterine position.

In other cases, an extremely tilted uterus (whether anteverted or retroverted) can occur due to conditions like endometriosis, infections in the uterus or tubes, or past surgeries.

Endometriosis happens when endometrial tissue implant outside the uterus but within the abdominopelvic area. It can cause adhesion of pelvic organs such as uterus, fallopian tubes, and bowels.

Past surgeries could also cause adhesions, or scar tissue that connects separate anatomic surfaces together, pulling the uterus into a retroverted position. Uterine Fibroids, or small non-cancerous lumps, may also render the uterus prone to retroversion.

Pregnancy itself can cause your uterus to tilt backwards. Gestation can weaken the ligaments that support the uterus. After childbirth, it can revert to its normal position, or become retroverted.

What are the possible complications of different uterine positions?

Although the anteverted and retroverted uterus pose no problems for conceiving a child, it usually does not cause any issues during sex. In cases of retroverted uteri, the ovaries and fallopian tubes are tilted backwards as well.

This means that during sex, the head of the penis could push against these structures (collision dyspareunia). Vigorous intercourse may cause significant pain due to pressure.

There are several methods that can diagnose an anteverted/anteflexed or retroverted/retroflexed uterus.

Here are some of them:

In some cases, symptoms such as painful sex can prompt your doctor to include a series of tests to rule out other causes of dyspareunia.

In the field of obstetrics and gynecology, imaging such as transvaginal or transabdominal ultrasound are very helpful in evaluating the pelvic anatomy in a practical and non-invasive manner, is usually applied to evaluate pelvic pathology or pregnancy in a non-invasive way.

How is an anteverted and retroverted uterus treated?

An anteverted/anteflexed uterus requires no treatment or medical procedures as this is the normal position that uteri of many women assume. A retroverted, retroflexed uterus is a normal variant which usually does not need any treatment unless it causes problems.

Further workup may be done to assess if there is myoma, endometriosis, adhesions, or other condition that may be associated with the uterine retroversion.

Doctors can use a pessary, a small silicone or plastic device, to prop the uterus forward. This is a temporary solution which can help in cases of urinary retention associated with retroverted uterus.

Other non-invasive ways to manage symptoms from retroverted uterus are as follows:

Surgery can help correct conditions, which can cause a retroverted uterus. Examples include myomectomy for fibroids and adhesiolysis or removal of scar tissue. In rare instances, hysterectomy may be done if the symptoms are very severe or debilitating.

Tilted uterus: Can it lead to infertility? https://www.mayoclinic.org/tilted-uterus/expert-answers/faq-20058485 Accessed 5 May 2020

Retroversion of the uterus https://medlineplus.gov/ency/article/001506.htm Accessed 5 May 2020

Anteverted Uterus and Getting Pregnant http://www.actforlibraries.org/anteverted-uterus-and-getting-pregnant/ Accessed 5 May 2020

How to Improve Vaginal Odor and Discharge