All You Need To Know About Psoriasis 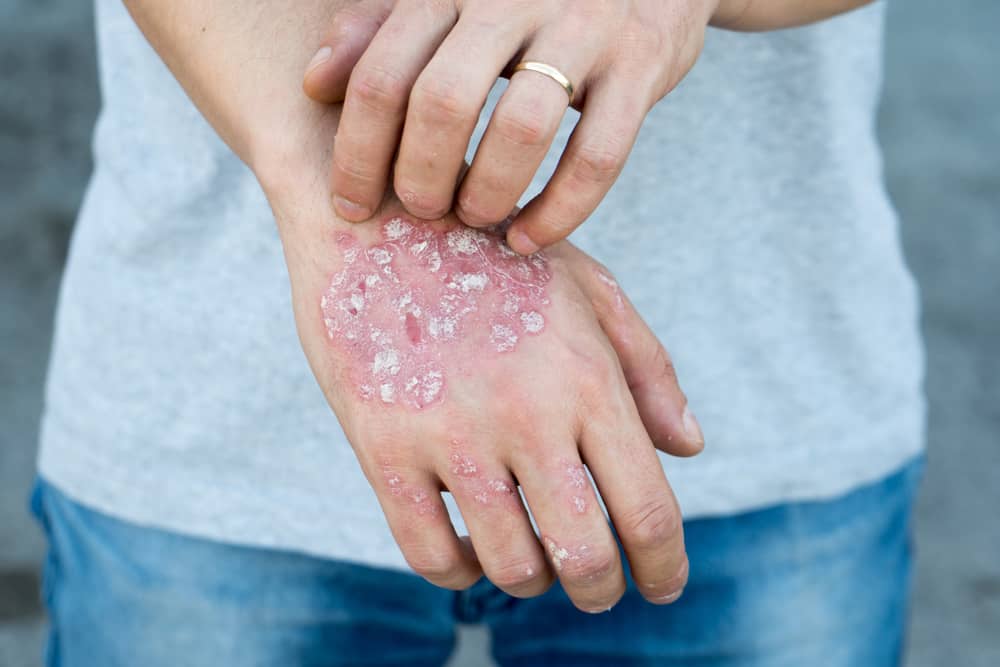 Your skin is the largest organ of your body which plays essential roles like generating vitamin D, preventing dehydration, and maintaining your body temperature.

It’s also constantly exposed to the elements and to bacteria, which makes it prone to infection and inflammation.

If you have this skin condition or if you suspect that you do, it’s best to gather the most information about it.

Learning more about the psoriasis causes and cures can be the first step to making the necessary lifestyle changes for your overall health and well-being.

But before we learn more about psoriasis causes and cures, let’s first define this skin condition.

Psoriasis is a long-term autoimmune, skin condition that results in rapid skin cell production. This causes them to pile up and create patches on the skin.

Psoriasis can appear on any part of the body, but it most commonly affects the areas, such as:

Patches on the skin caused by psoriasis appear to be dry and scaly, and usually burns or stings.

However, the patches can alternatively flare up and subside for some periods.

Types of psoriasis differ based on how they look and where they appear on the body.

However, it’s possible for one person to develop more than one kind of psoriasis.

There are several types of psoriasis that appear on different parts of the body.

Below are the types of psoriasis and their individual characteristics:

Plaque psoriasis is the most prevalent type of psoriasis. This disease appears as raised, red, and thick patches of skin covered with a silvery build-up of dead skin.

These patches differ in size and most often appear on the lower back, elbows, knees, or scalp. They patches often itch, and they can crack and bleed.

This type of psoriasis is the second most common type, next to plaque psoriasis.

It’s characterized by multiple, small, and drop-shaped lesions that usually appear on a person’s trunk or limbs.

Inverse psoriasis or intertriginous psoriasis usually affects folds of the body like the groin or buttocks.

It appears as very red and smooth lesions that worsens through friction or sweat.

Erythrodermic psoriasis can be life-threatening if left untreated because it can cause pneumonia or congestive heart failure.

Symptoms can vary, depending on the type of psoriasis.

However, the most common signs and symptoms of psoriasis are the following:

There are no special tests to determine if a person has psoriasis.

During a check-up, a dermatologist will usually examine the affected parts of your skin.

Your dermatologist or healthcare provider may also take a sample of your affected skin. Then view it through a microscope.

Psoriasis skin will look more inflamed than a skin sample from a person with eczema.

The exact cause of psoriasis is still unknown up to this very day. However, scientists and doctors now know that a person’s immune system and genes can influence the development of psoriasis in a person.

If someone in your family has psoriasis, then there’s a greater chance that you’ll develop this disease. But, psoriasis isn’t passed from one person to another because it’s not a communicable disease.

Psoriasis flare-ups are usually caused by triggers, such as:

If you’ve already been diagnosed with psoriasis, then the best way to prevent future flare-ups is to make the conscious decision to avoid your triggers.

How is Psoriasis Treated?

Thankfully, there are a variety of treatments available for people suffering with psoriasis.

These treatments alleviate some of the pain and discomfort caused by psoriasis lesions. However, psoriasis never really goes away once a person acquires this condition.

Options for treatment of psoriasis include:

This type of treatment involves medication that is applied to affected areas of the skin. The following topical medications can treat psoriasis:

Note that topical treatment is usually the first choice in treating mild to moderate psoriasis. And for some people, it is enough to control the symptoms.

A dermatologist may also advise you to get natural sunlight outdoors.

This option is usually for severe cases of psoriasis that don’t respond to topical or light therapy.

There are also natural alternatives to treatment and medication for psoriasis.

Not enough research has been done on the effectiveness of natural alternatives to psoriasis, but some might bring you relief. Below are some natural remedies for discomfort caused by psoriasis:

Aloe Verahas been used to relieve skin inflammation and redness. Some researches have shown that using aloe vera as a topical treatment may help scaly and dry skin caused by psoriasis. Ask your doctor for a gel or cream with 0.5% aloe vera.

Some reports have claimed that using Dead Sea or Epsom salt can help reduce the appearance of scales and itching caused by psoriasis. Just add the salt to warm bath water and soak your skin in it for about 15 minutes.

Psoriasis is a chronic skin condition that causes red, itchy, and scaly patches on the skin. If you suspect that you have psoriasis, it’s best to consult with your health practitioner before attempting to treat your affected skin.

What is Psoriasis? https://www.aad.org/public/diseases/psoriasis/what Accessed June 29, 2020