Can Sugary Drinks Cause Early Puberty in Girls? 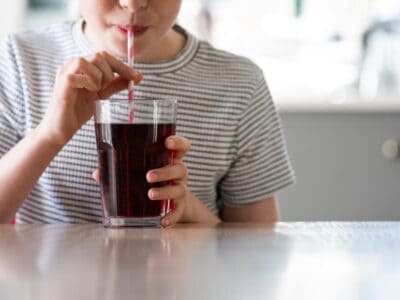 Soft drinks are one of the most favored beverages among both kids and adults. Many of you may have heard about the negative effects of soft drinks on weight gain and blood sugar levels. But do you know sugary drinks can cause early puberty? Recent studies by the Harvard T. H. Chan School of Public Health suggest that young girls who drink too much softdrinks are at high risk of early puberty.

Girls generally enter puberty between eight and 14 years of age. The researchers found that the average age for puberty among girls who consume sugary drinks two to three times a week had their periods at 13 years of age.

While, on the other hand, girls who had it more frequently, got their first period at an average of 12.8 years of age. The 2010 Harvard study also concluded that 10 per cent of girls of seven years of age showed breast development, along with the onset of puberty. The figures are twice as high as the estimates in 1997.

Sugary Drinks Cause Puberty in Girls: What’s the Truth? The early onset of puberty is a common phenomenon among girls now. The age of puberty has changed drastically over the decade. In the United States and other developed countries, many girls under 10 years old have shown signs of developed breasts.

Researchers believe that artificial sweeteners in beverages are the main cause. Healthcare experts have provided evidence of many cases of obesity that are linked to the consumption of aerated drinks. The drinks include soda, fruit punch, lemonade, sports, and energy drinks.

The purpose of the study is to raise a concern about the significantly high consumption of soft drinks among kids and adolescents in numerous countries. At first, the research focused on the relationship between childhood obesity and drinking such as unhealthy beverages. However, gradually, scientists have found an association between the age of the first menstruation and high consumption of sugary drinks.

To explain the correlation between early puberty and soft drinks, researchers have provided some contexts. According to that study, sugary drinks can cause early puberty. Sugary drinks have potentially doubled or tripled the glycemic index compared to naturally sweet drinks like fruit juices. High glycemic foods cause a rapid increase in insulin concentrations in the child’s body, which in turn raises hormone levels. This hormonal circulation has been linked to early onset of early puberty.

Researchers continued to widen their study with more than 5,000 adolescent girls from the US, who had not yet experienced their first menstrual period. Researchers collected information about these girls’ diets, which also included their frequency of consuming soft drinks and other artificially sweetened beverages. Not only could soda be harmful, but iced teas and fruit drinks could also have equally adverse effects on physical developments, among other detrimental outcomes.

Researchers monitored the participants of the study for five years to examine the effects of sugary drinks on early puberty. According to the statistics, those who drank more than one and a half servings every day began their periods approximately three months earlier than those who drank fewer servings.

The finding not only raises awareness about childhood obesity but also indicates a potential risk of developing breast cancer. Though the reason for this conclusion is unknown, the study offers a deep insight into the potential risks that sugary drinks have on early puberty among young children.

Early Puberty – A Cause for Concern

Below are the adverse effects that early puberty often has on young children:

It may be difficult to convince children to avoid these drinks, ask them to limit consumption as much as possible. Instead of drinks with saturated sugar, children can replace them with healthy beverages.

Most of the time, sugary drinks just bring pleasure to the tongue, not the overall body.

Sugar is causing girls to get their periods sooner/https://www.smithsonianmag.com/smart-news/sugar-causing-girls-get-their-periods-sooner-180954055/Accessed on 06/11/2019

Do sugary drinks trigger early puberty in girls/https://www.newscientist.com/article/dn26868-do-sugary-drinks-trigger-early-puberty-in-girls/Accessed on 06/11/2019

Sugary drinks linked to earlier onset of menstrual periods/https://www.telegraph.co.uk/news/health/11373312/Fizzy-drinks-cause-early-puberty-and-increases-cancer-risk-in-girls-study-finds.html/Accessed on 06/11/2019

Sugary soft drinks linked to earlier periods in girls/https://www.nhs.uk/news/food-and-diet/sugary-soft-drinks-linked-to-earlier-periods-in-girls/Accessed on 06/11/2019

Sugar is causing girls to get their periods sooner/https://www.smithsonianmag.com/smart-news/sugar-causing-girls-get-their-periods-sooner-180954055/Accessed on 06/11/2019