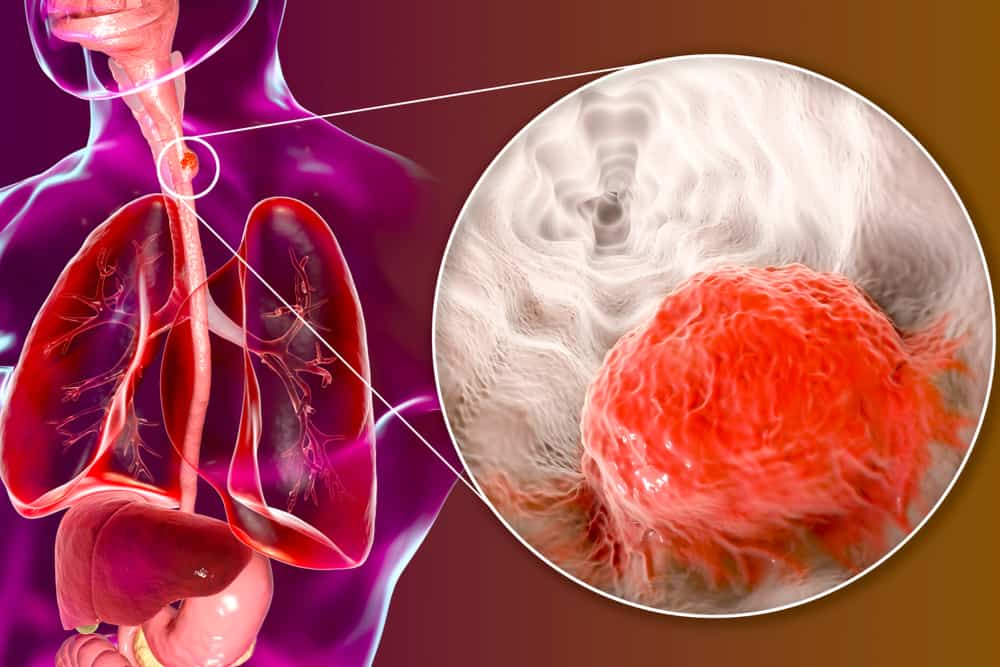 The esophagus is the hollow tube that serves as the passageway for food and liquid from the mouth to the stomach. Esophageal cancer is when cells in the esophagus start to grow uncontrollably.

When esophageal cancer starts to spread, it goes beyond the lining of the esophagus and spreads into the nearby lymph nodes. When the cancer cells enter the lymphatic system, they can potentially travel throughout the body.

Esophageal cancer may show limited symptoms or may be asymptomatic during its early stages. This makes it difficult to diagnose and treat in a timely manner.

This occurs in the lining of the lower part of the esophagus near the stomach where mucus is produced. This mucus helps food pass through.

Cancer cells start to grow in the flat cells that line the inner layer of the esophagus.

Esophageal cancer often occurs in men who are 50 years old and above. People who smoke and drink too much alcohol may also be at higher risk of getting esophageal cancer. People who are obese or have nutritional deficiencies are also at risk.

Conditions that increase the risk of esophageal cancer include:

During the early stages, symptoms of esophageal cancer can be mistaken for other conditions such as GERD. Symptoms often worsen as the cancer progresses.

Esophageal cancer can spread to other parts of the body which can also produce different symptoms depending on the affected organ. Symptoms may include:

The doctor will conduct a physical exam to check for any lumps especially in the upper gastrointestinal tract. Lifestyle factors and medical history will also be taken into account. Tests used to help in diagnosing esophageal cancer include:

Aside from an X-ray, other imaging tests such as CAT, MRI, and PET scans will also be conducted especially if there is a suspicion that the esophageal cancer has already spread to other parts of the body.

Esophageal cancer progresses and causes death especially if it is diagnosed in its late stages. The earlier the diagnosis and treatment, the higher the chances of recovery. Treatment depends on the stage the cancer is in and the type of esophageal cancer.

People affected with esophageal cancer may also choose to partake in clinical trials that will help in cancer research.

Esophageal cancer is a disease wherein cancer cells start growing in some parts of the esophagus and can spread to the lymph nodes and other parts of the body. Esophageal cancer presents mild to no symptoms during its early stages, and is usually diagnosed in its late stages. Treatment such as chemotherapy, radiation therapy, and surgery are options for managing this form of cancer.

Learn about Other Cancers here.